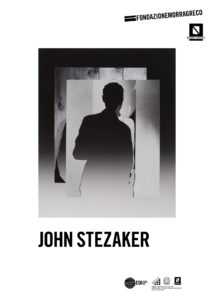 The Fondazione Morra Greco is pleased to announce a major solo exhibition of the work of British artist John Stezaker.

Conceived and selected before the pandemic, the exhibition also incorporates work produced throughout lockdown, during a period of intense creativity for the artist. The exhibition brings together more than eighty works, from the late 1970s to the present day.

For over 40 years Stezaker has been using found photographs, film stills, postcards, magazines, books and other printed material to create a range of works including collages, image-fragments, films, bookworks and silkscreen prints on canvas. He does not consider his found objects and images as appropriations but sees them as “finding him” in a psychoanalytic sense, following the Surrealist, rather than the Duchampian/Pop approach of 80s appropriation art. The works in the show are inspired by and reference the work of Joseph Cornell and the meta-narratives of Italo Calvino.

Much of Stezaker’s collage work combines images from different historical epochs: turn-of-the-century postcards, 1940s film stills, 1930s & 40s mannequin hands etc. The work further abounds with references to other periods of art and culture. In the bookworks, Metamorphosis and Observatory series, Baroque architecture is used to project an image of a contemporary observatory (a reference to Calvino’s Mr. Palomar).  There is always a sense of time travel in Stezaker’s work and he uses the architectural space of the Palazzo Caracciolo to fully exploit the implicit historical strata of the exhibition space.

The exhibition opens in the basement with a cinematic work, Train, one of the first film-loops Stezaker conceived. It is a successor to his first loop, Horse, but has only recently been completed for this exhibition. Horse, referring to the origins of cinema in Muybridge’s photographs of horses in action, consists of identically formatted pictures of several thousand racehorses. Trainsimilarly makes reference to cinematic origins in referring to the Lumière brother’s first public film showing. Train, which consists of a multiplicity of images of different trains, is projected onto a screen, behind which the hidden arch of the Palazzo Caracciolo’s ancient Greek foundations “opens” onto a sealed underworld, the discovery of which has arrested the contemporary urban development of the Neapolitan underground railway. Stezaker’s projection of a train is of a ghost of an abandoned project and became, for him, a metaphor for his own art (as an art of interruption) and as the inspiration for the spacial and temporal stratifications which are a part of both the exhibition as whole and of his work in general as well as in the building which houses it.

Between the references to an underworld in the basement and to the celestial blues of the overworld and sky imagery of the collages on the top floor, the two intervening floors of silkscreens on canvas and bookworks in different ways represent intermediary realms, the Observatory and World pieces suggesting remote vision, looking from one realm and another. The silkscreens, by contrast,  employ the close-up to create a spectral sense of presence.

Whilst the lower three floors are dedicated to Stezaker’s image fragments, bookworks, films etc., the top floor houses Stezaker’s most familiar work, his collages. On show are two new series: Star and Dis-Astro from 2017-18 and Double Shadow from 2019-21, both, in different ways, referring to the celestial. The former series exploit the ambiguity between the idea of the film star and its metaphorical counterpart, in the figure of the sky god. The Double Shadows are recent adaptations (doublings) of earlier collage series, the Dark Stars and, in particular, of the Father Sky collage from the 1970s and 80s, examples of which are also on show. Combining double cut-out coloured backgrounds from 1950s and 60s film star portraits, the Double Shadow collages exploit the power of the silhouette to evoke the uncanny and the unworldly, as well as making reference to the mythic origins of painting in the fixing of shadows. The Double Shadows are mutant combinations of the shadows of cinema, which create, out of the familiar contours of star portraiture, figures which seem to belong to an otherworld of myth and fairytale. Inspired by early cinema (eg. The Student of Prague) and other-turn-of-the-century figurations of the uncanny and horrific aspect of the doppelgänger and shadow mythologies, the Double Shadow collages negotiate the space between images as a limbo somehow outside time where “nothing is left but looking, an obsession in which real time is suspended while, as we sometimes feel in dreams, the dead, the living and still unborn come together on the same plane” *.

John Stezaker was born in England in 1949, and currently lives and works in London and St Leonards on Sea. He studied at the Slade School of Fine Art in London in the 1960s, and has since taught at Central Saint Martins School of Art and the Royal College of Art. In September 2012, he was awarded the Deutsche Börse photography prize.

Stezaker’s work has been exhibited internationally since the 1990s and is held in museum and public collections around the world, including the Museum of Modern Art, New York; the Tate, London; Los Angeles County Museum of Art; Los Angeles, Frans Hals Museum, Haarlem, The Netherlands; and the Art Gallery of New South Wales, Sydney, Australia, among others.