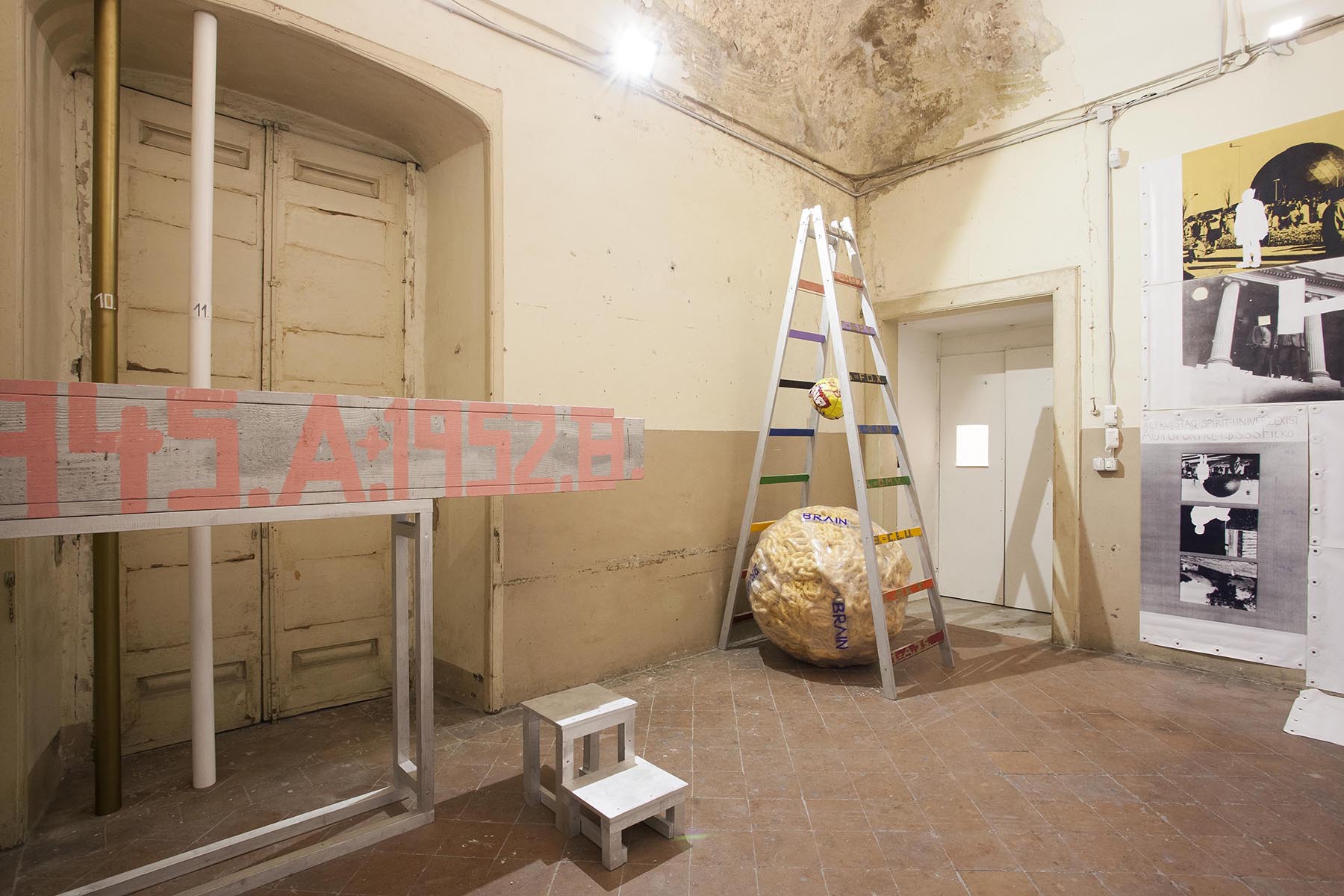 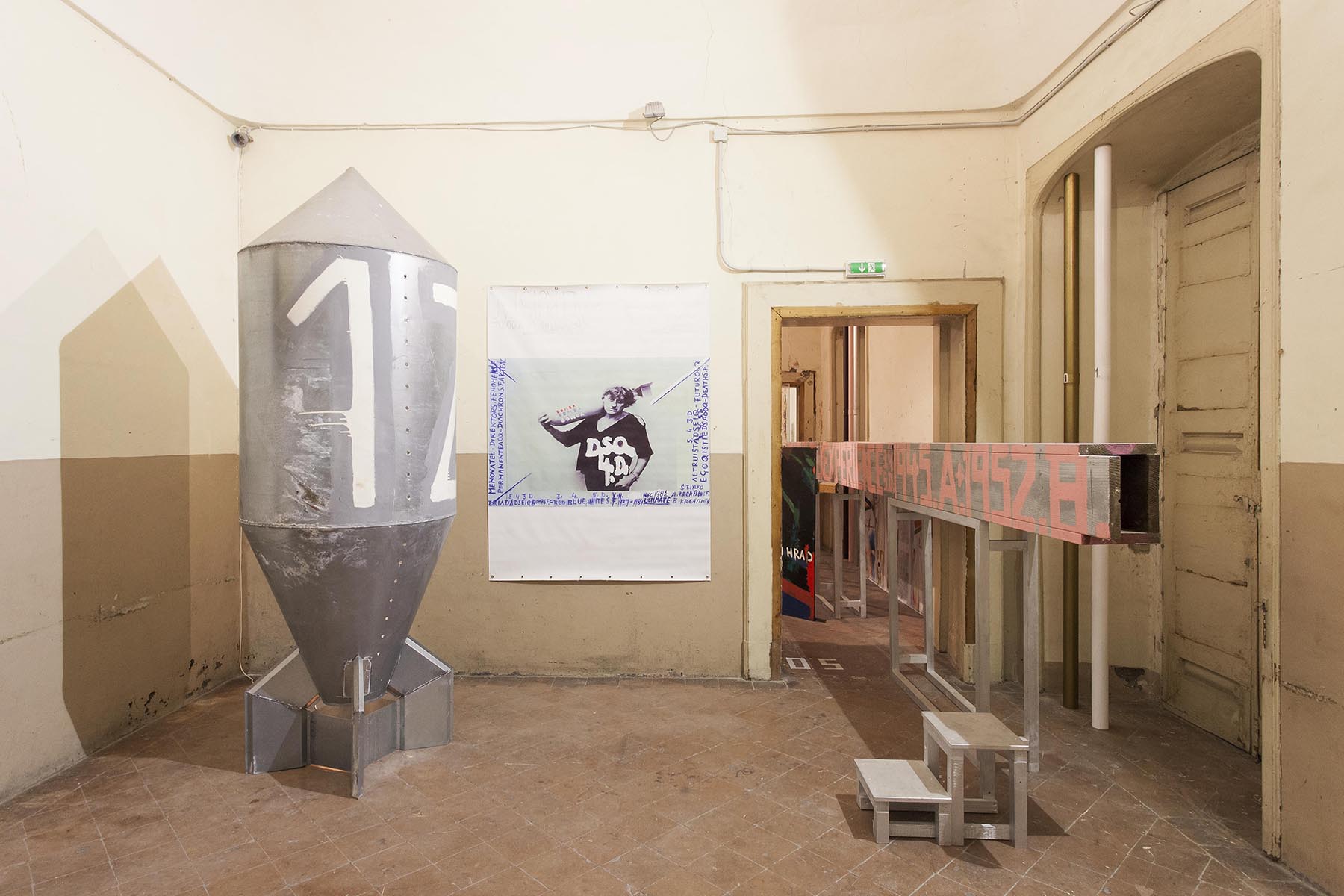 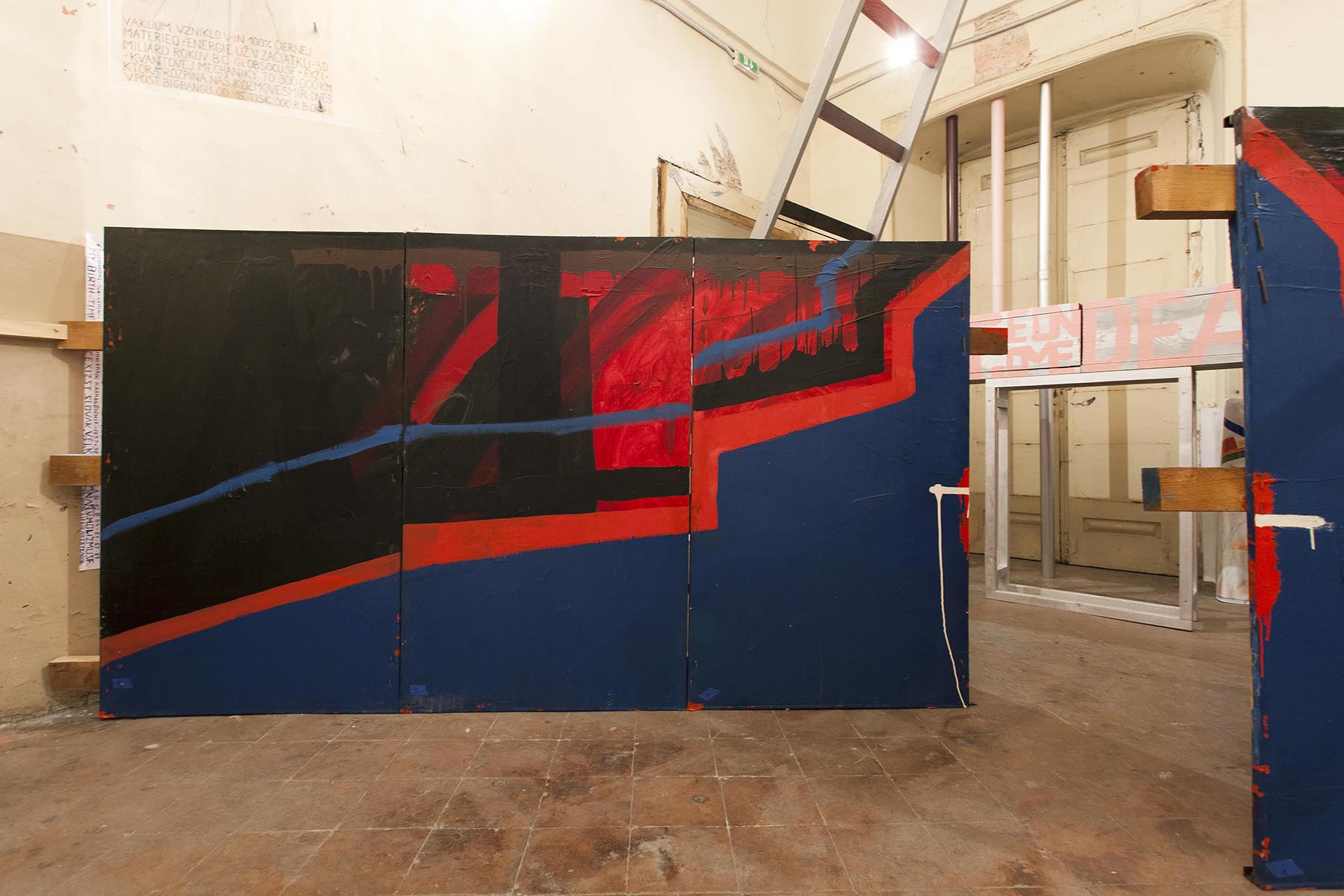 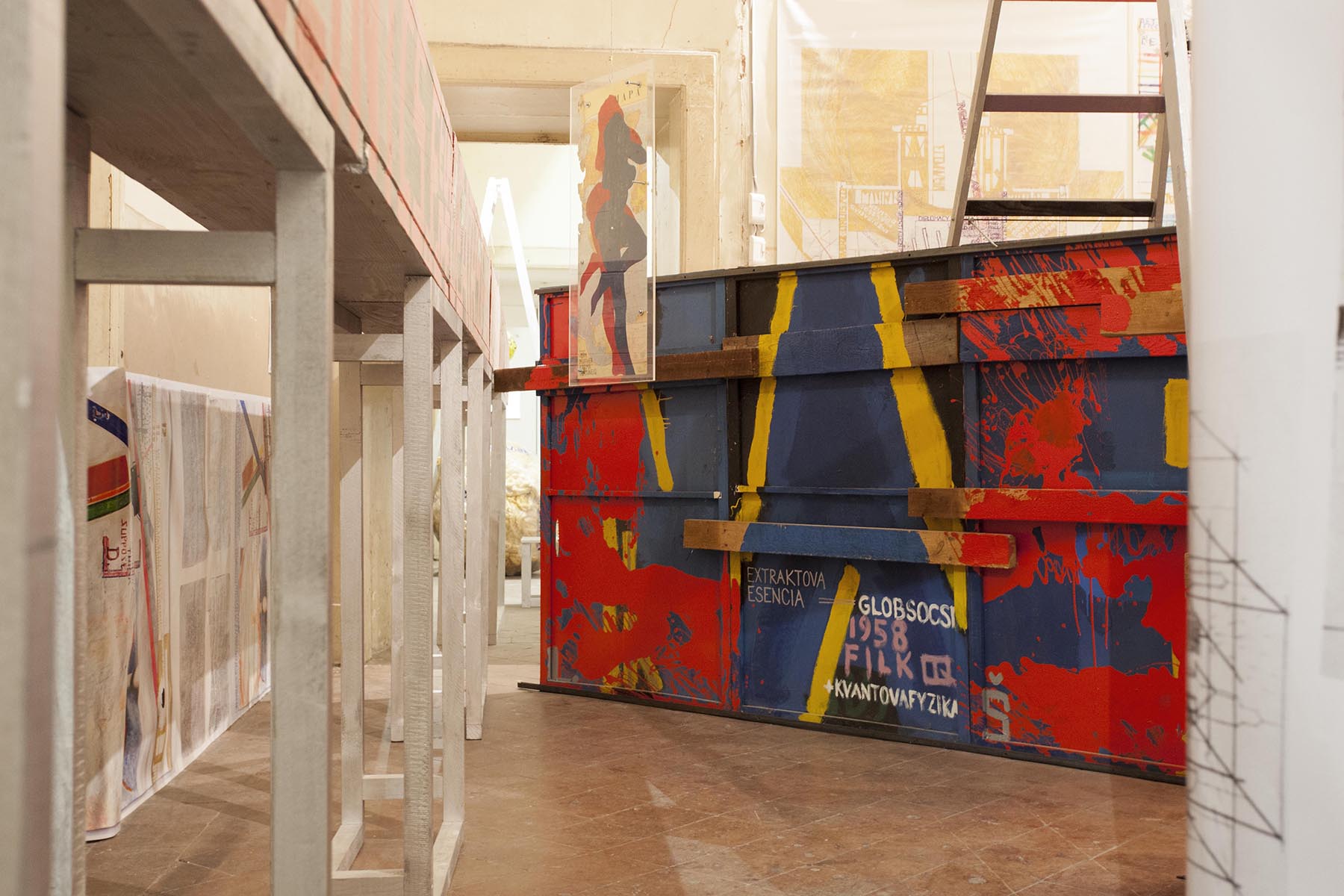 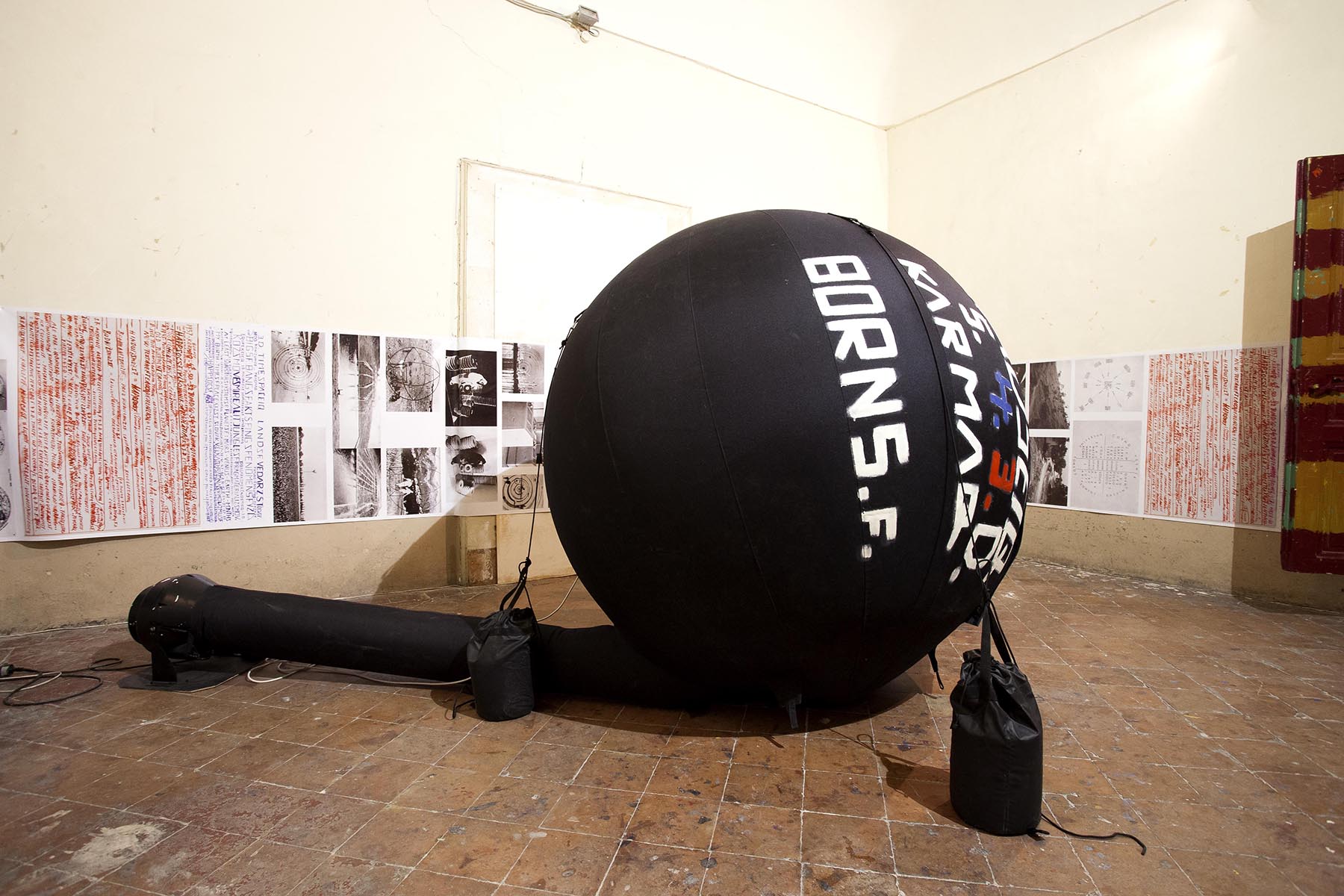 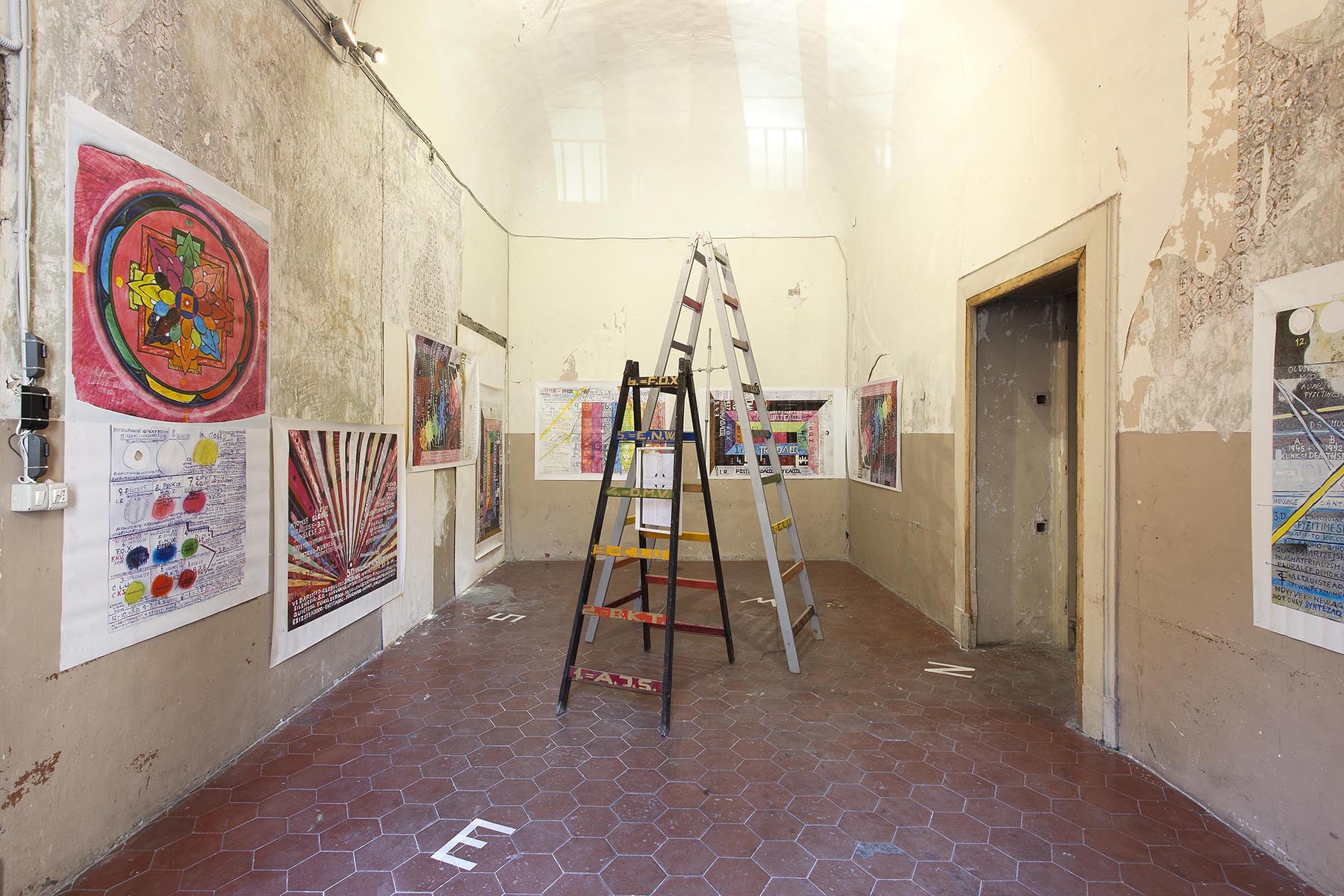 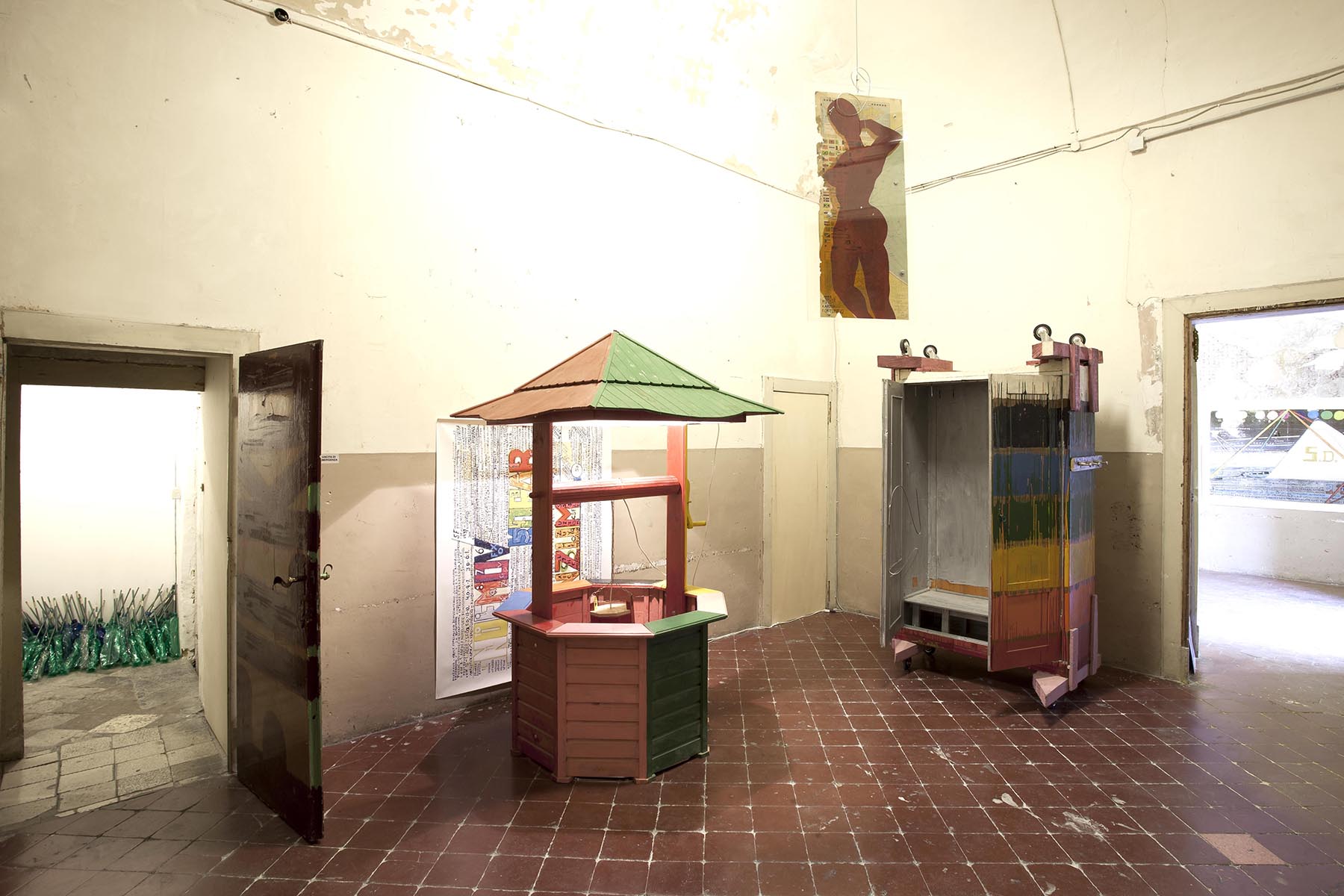 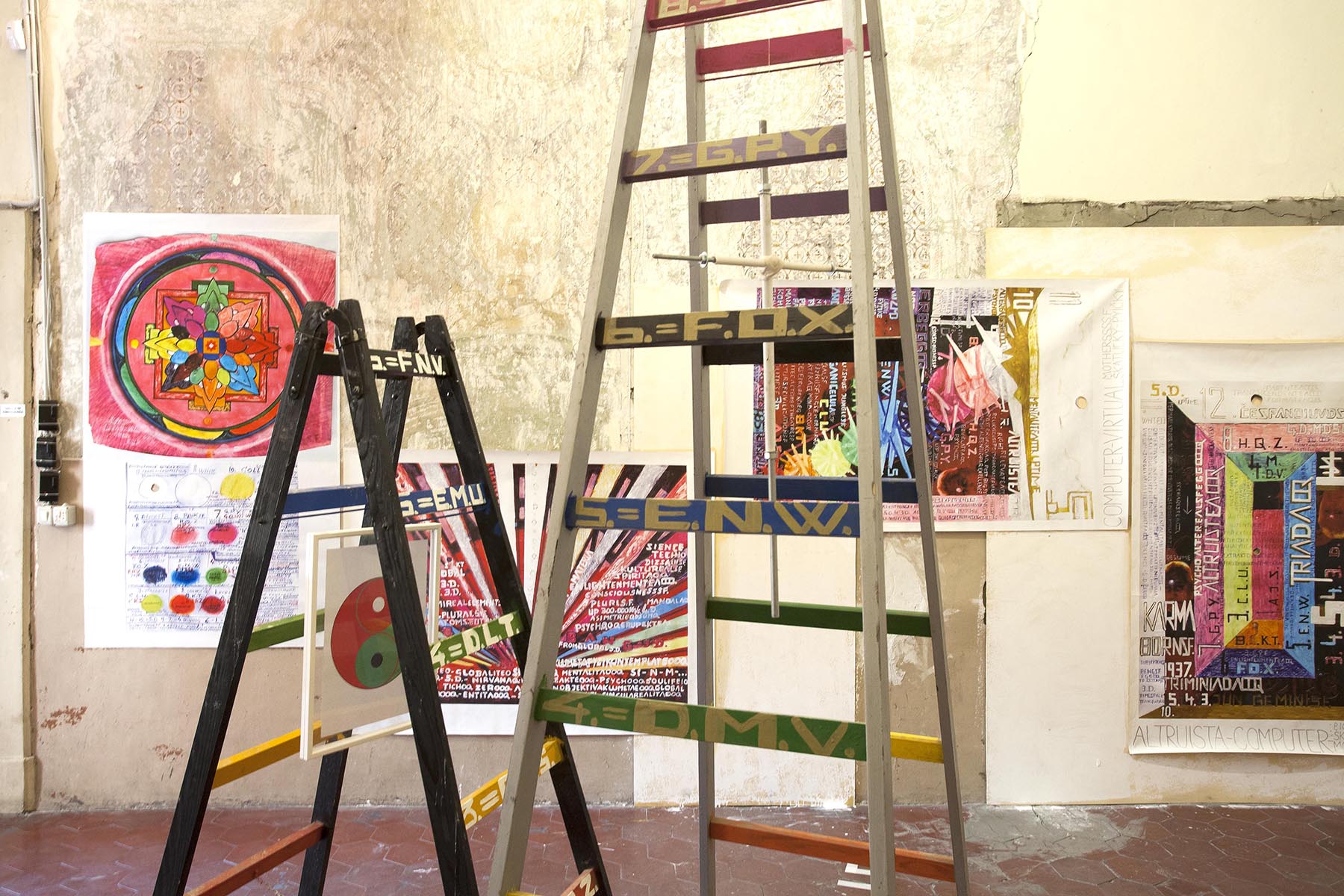 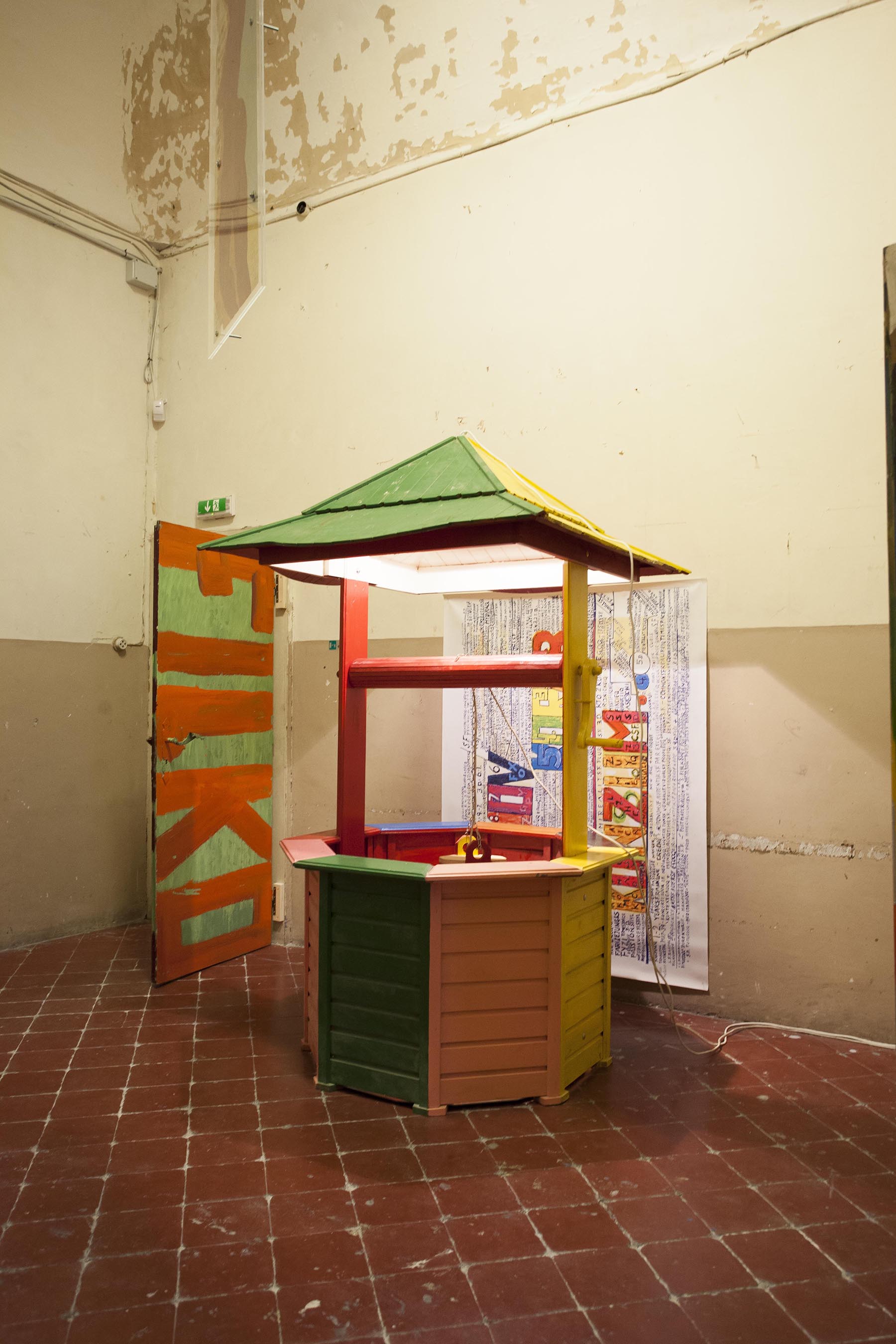 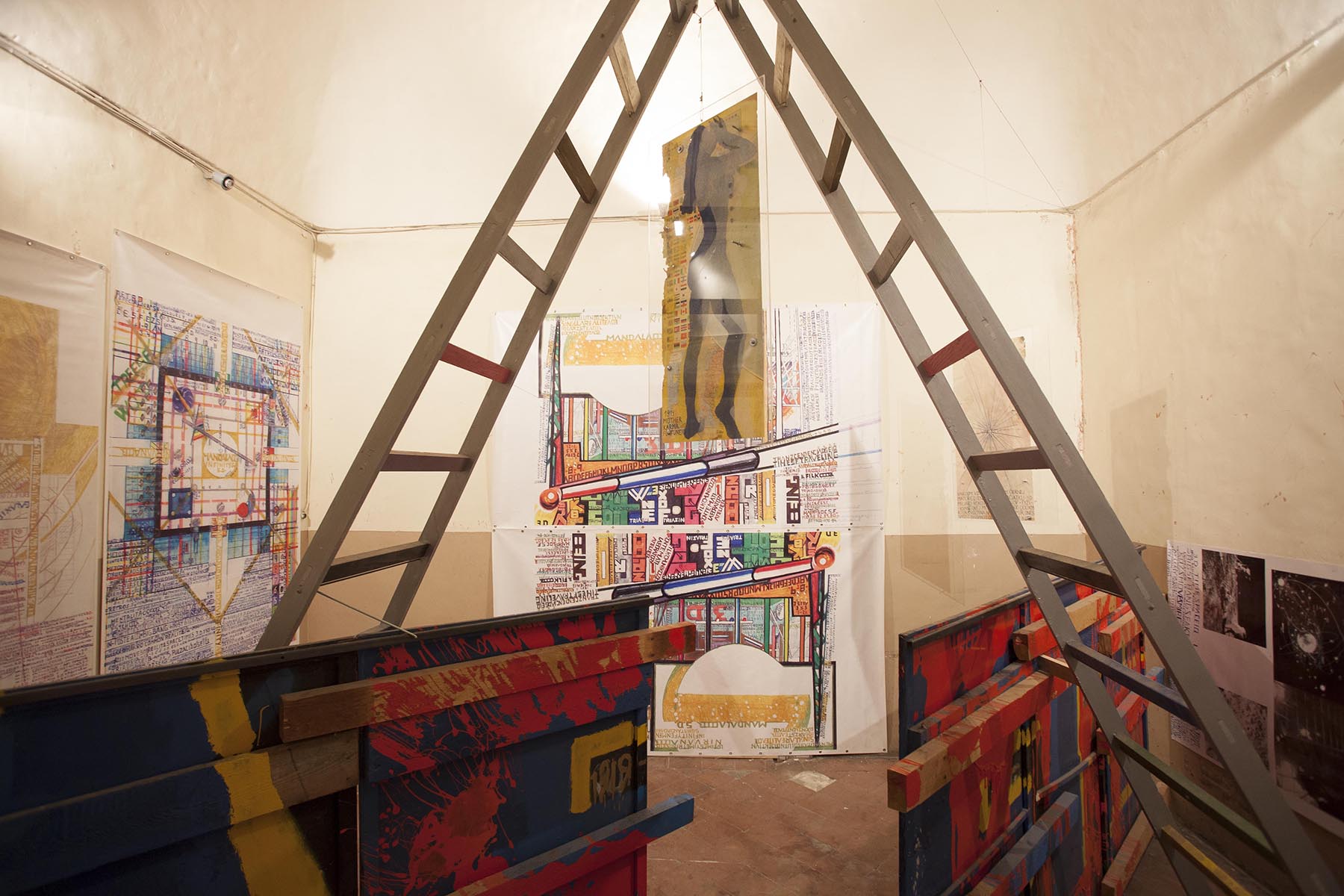 Stano Filko’s work is enormously broad and dynamic. It is based on the cumulative archiving of objects and documentations through installations, environments and his voluminous immaterial Project Art, Prospekt Art or Text Art. These last are diagrams based on texts in a variety of media, including diverse found or adjusted paper materials (often scale paper), perforated and colored plastic, aluminum, or sound in the case of his severe audio recordings on vinyl.
He often uses readymade texts, while elaborating his autonomous ideological system, which he calls a psychophilosophical system. In keeping with his seemingly hermetical, almost alchemistic approach he creates neologisms as his essential vocabulary by composing or abbreviating existing words.
The concept of numerology is strongly involved in his work. The numbers are supplemented with a unique iconography and a particular repetition of elements like mirrors, scale-papers, globes, bombs, ladders, etc.
Filko conceptualizes the time dimension. His spatial works mostly belong to the so-called PostBigBang part of his oeuvre, in which he deals with a physical space. Others are related to the AnteBigBang part, symbolizing the metaphysical world; i.e. the Universe being approached over 4. D. of pure time by means of sensuality – sensibility – emotion – SPIRITUALITY…. Neither PostBigBang nor AnteBigBang relate exclusively to the creation of the cosmos but correlate with Filko’s incarnations (13. –14. –15. 6 1937) including his two clinical deaths in 1945 and 1952.
Stano Filko’s color system is especially significant. He developed it against the background of systems researched in physics (Newton) and a knowledge of color from art theory. The crucial point is that Filko is using it as a structure. By dividing it into 5 dimensions he creates the rough vertical structure. Each one is furthermore horizontally structured into 20 colors. However, each color extends just to a particular dimension (creating something like chakras), while each higher dimension contains everything from the lower ones. The spatial model of such a schema would be a pyramid.
Filko’s system is all-encompassing. The colors are further more structured into anything else through philosophical systems up till plain logos. In this way, the structuralisation as a mode of analysis is implied to any possible phenomenon, either the defined one or newly named by author. Substructures are ongoing until the tiniest element is reached.
With this formula he can create the endless linear row. However, at the same time, there is not only one such linear row running, but there are endless numbers of interrelated rows, which Filko develops on different subjects and within particular systems of knowledge in which he is interested (e.g. through discussing gender, evolution, the creation of universe, the afterlife, art, society, ethics, and so on and so forth).
Yet in the variety of his descriptions he typically deals with contradictions. Binary oppositions enable him to develop additional internal dialectics (i.e. one of his customary topics is egoism vs. altruism).
All such “rows” he creates then run parallel. For example dimensions can represent and be replaced by the classical elements (Fire, Air, Water, Earth) or compass points (N, S, E, W), or in other cases by different social topics, and many other factors. Following this established structure, Filko is always able to recreate additional parallel endless rows with functional interconnections. Complex overlapping layers with endless interrelations create a rhizome.
Filko is often regarded as an utopist. In fact he follows the universalist model of the world beyond our known universe. He attempts to achieve some kind of final algorithm (he would say ‘singular truth’ instead of ‘pluralistic relativity’), enabling him to define an essential constellation as a sort of final character explaining every aspect of infinity. Filko, who doesn’t accept pluralism, doesn’t believe that things can be one way and at the same time another. To him everything is somehow containable. Absolute Objectivity!

The actual show is based on the artist’s selection of artworks presented before in the AMT project gallery in Bratislava (2012). It is a chronological overview of Filko’s work with the focus on its postbigbang part. The show deals with the creation of cosmos, the idea of incarnation, the phenomena of clinical death and the space of the EGO depicted in a number of installations and objects.