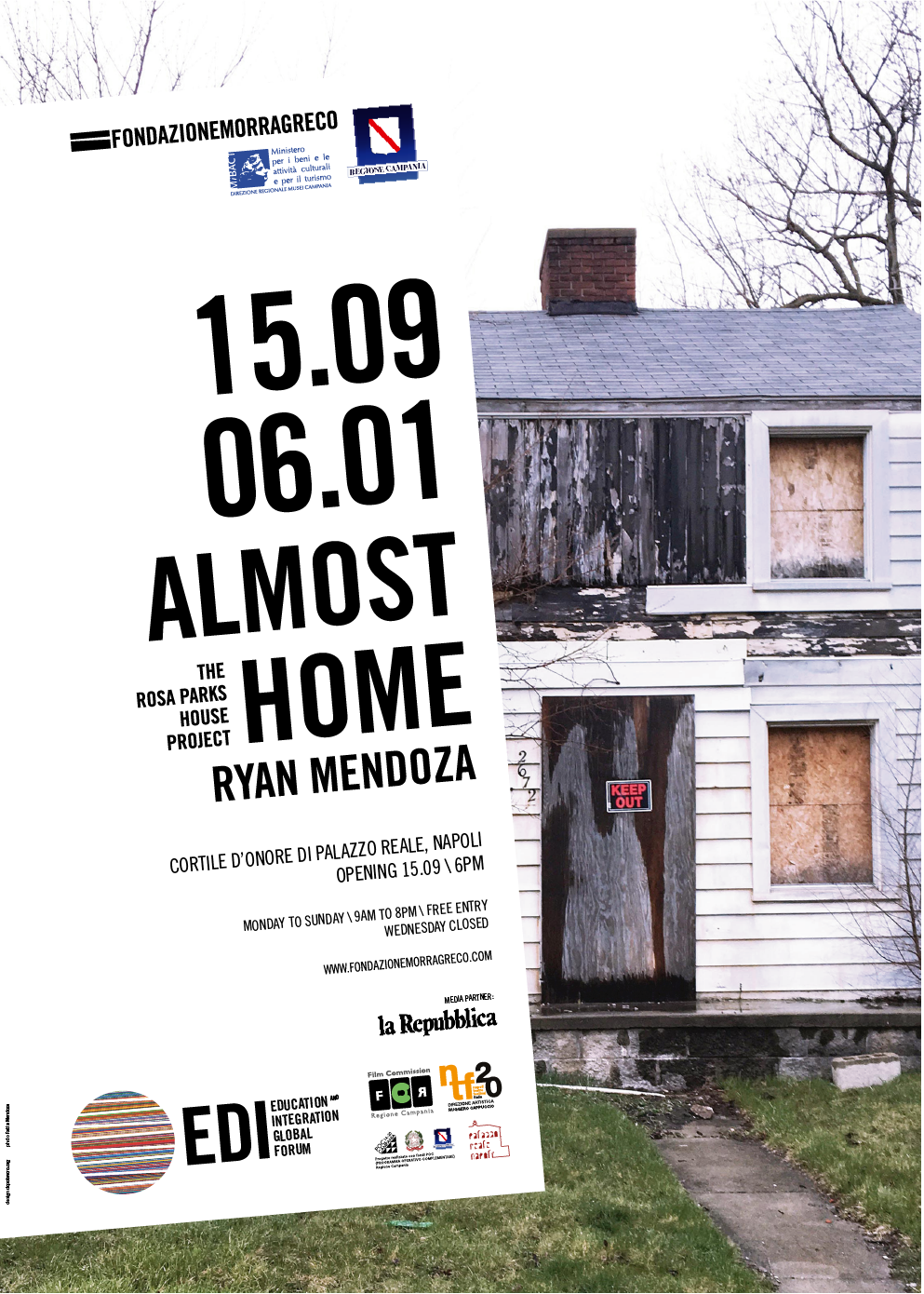 Fondazione Morra Greco leaves the borders of its spaces and enters the Royal Palace of Naples to present the “Almost Home – The Rosa Parks House Project” by the American artist Ryan Mendoza.  Realized with the support of Regione Campania and in collaboration with the Direzione regionale Musei Campania, the project includes the exposition of the house of the Afro-American activist Rosa Parks, who in 1955 launched the boycott of the public transport in the city of Montgomery, becoming an important symbol in the struggle for the civil rights of African Americans.

Exhibited in the Courtyard of Honour of the Royal Palace, the Parks’ house, originally located in the city of Detroit, was saved from demolition and recovered by the artist Ryan Mendoza. In 2016 he decided to protect it from neglect and reassemble it in the garden of his house in Berlin. The house had been abandoned for some time and had previously been purchased by Parks’ niece, Rhea McCauley, who, not having the financial means to renovate it, had tried to raise funds but without success. This is how she approached Mendoza, after learning about his project “The White House”, in which the artist adapted the facade of an uninhabited house in Detroit, repainting it white, and then exhibited it in Art Rotterdam.

It was 1992 when Mendoza moved to Naples, where he lived and worked in the spaces of Fondazione Morra Greco before it became a foundation, trying to recreate a familiar environment not only with painting production, which leads to intimate and personal dimension, but also with manual restoration work. Naples was almost the home of Mendoza for about fifteen years and now it is almost the home of The Rosa Parks House project. It is almost home because the artist would like one day the Parks house to return to its place of origin, to the place where the story that caused the great mobilization of the African-American community of Montgomery took place. The places carry the signs, fractures and wounds of history; they are, consequently, the mirrors of these processes and sometimes manage to highlight their gaps and contradictions.

Understanding the importance of the house as a symbol of the complex relationship between history and collective memory, too often ripped apart by operations that attempt to remove rather than rebuild, Mendoza takes the Parks house with him.

After exhibiting it in Berlin and in Providence at the WaterFire Arts Center, he brings the house to Naples, the city that welcomed and hosted him for many years. With the “Almost Home – The Rosa Parks House Project”, Ryan Mendoza keeps alive the memory of Rosa Parks and all those who lived in the house during a dramatic and conflicted moment in American history, whose identity, today called into question by the return of the Black Lives Matter, appears increasingly fragile and contradictory due to the wounds of a colonial past still open.

Ryan Mendoza, born 1971 in New York, is the artist behind “The White House” (2015), “The Invitation” (2016) and the noteworthy “Rosa Parks House Project” (2017). Described as a ‘rarity in the artworld’ by author Milan Kundera, Mendoza’s artistic projects and paintings move between expressionism and realism, engaging Americana and historical references. Ryan has shown with a range of European galleries and museums including White Cube, London, Galerie Lelong and Museo Madre, Naples. In 2015 his intimate artist diary ‘Tutto è mio‘ was published by renown Italian publisher Bompiani. In 2018 Mendoza was a guest lecturer at Columbia University, Brown University and RISD School of design. The award-winning documentary “The White House”, 75min, 2017, directed by his wife Fabia gives insight into Mendoza’s artistic endeavors and tells the background story of the Rosa Parks House Project. He lives between Berlin, Germany and Sicily with his wife Fabia and their son Dylan.