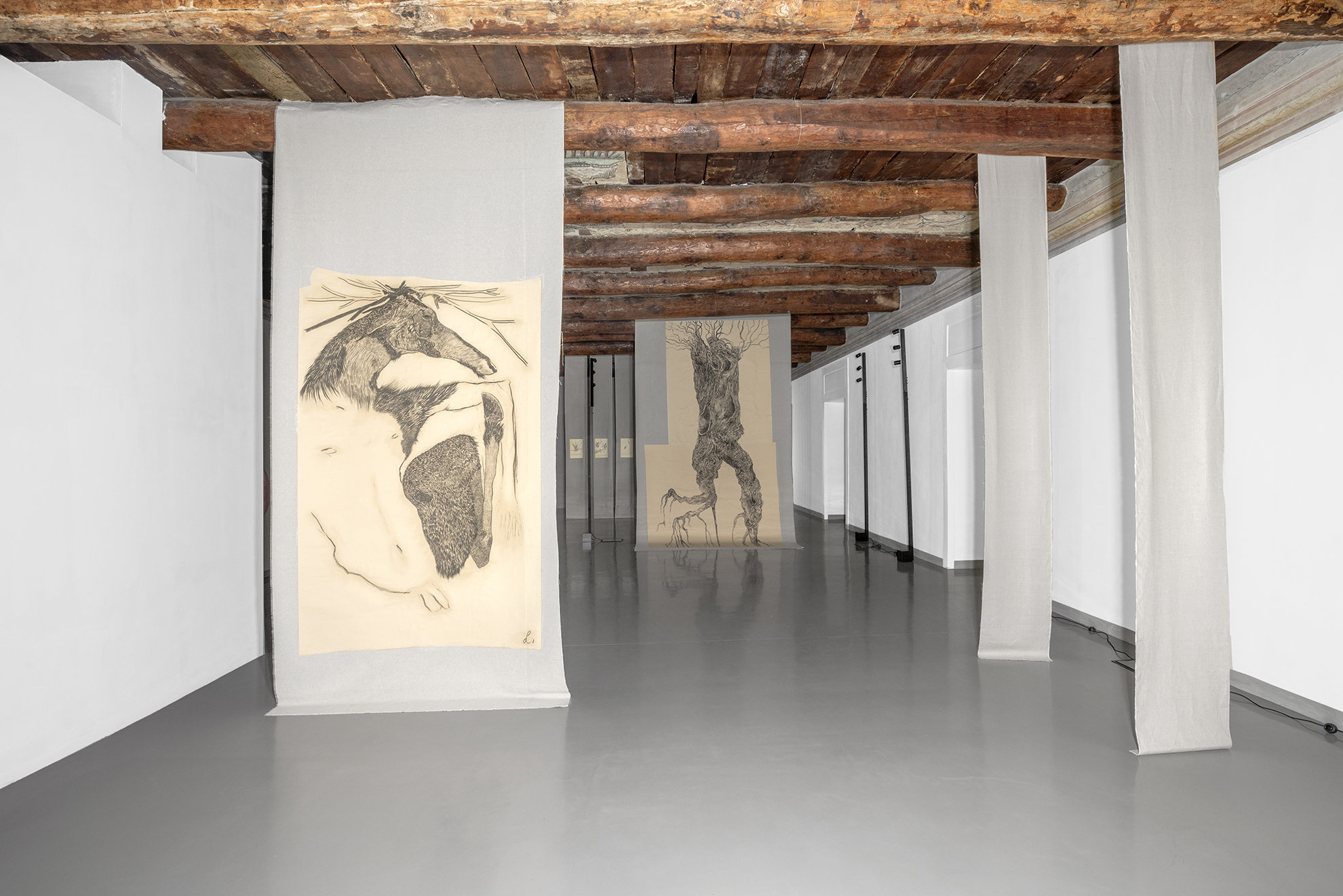 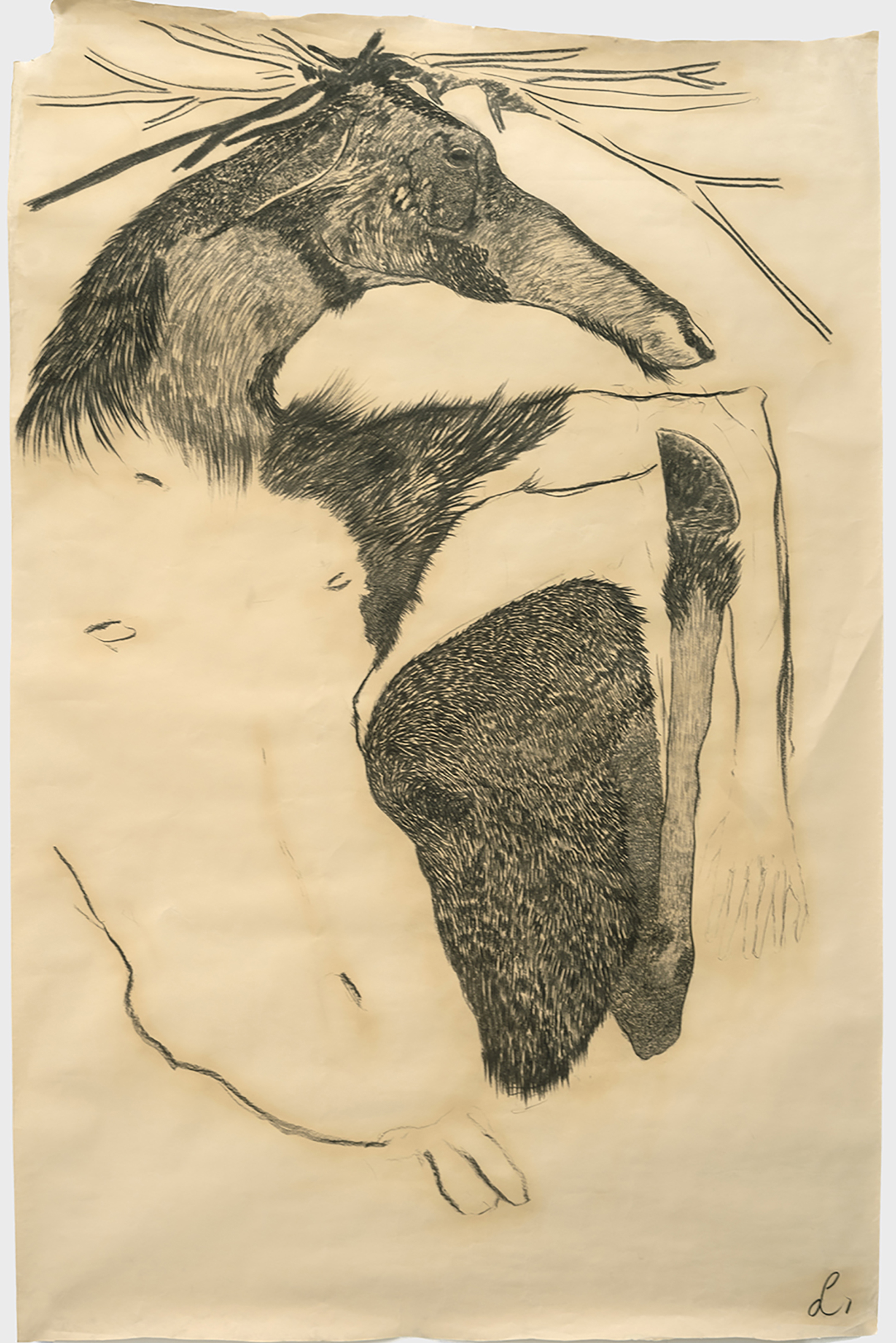 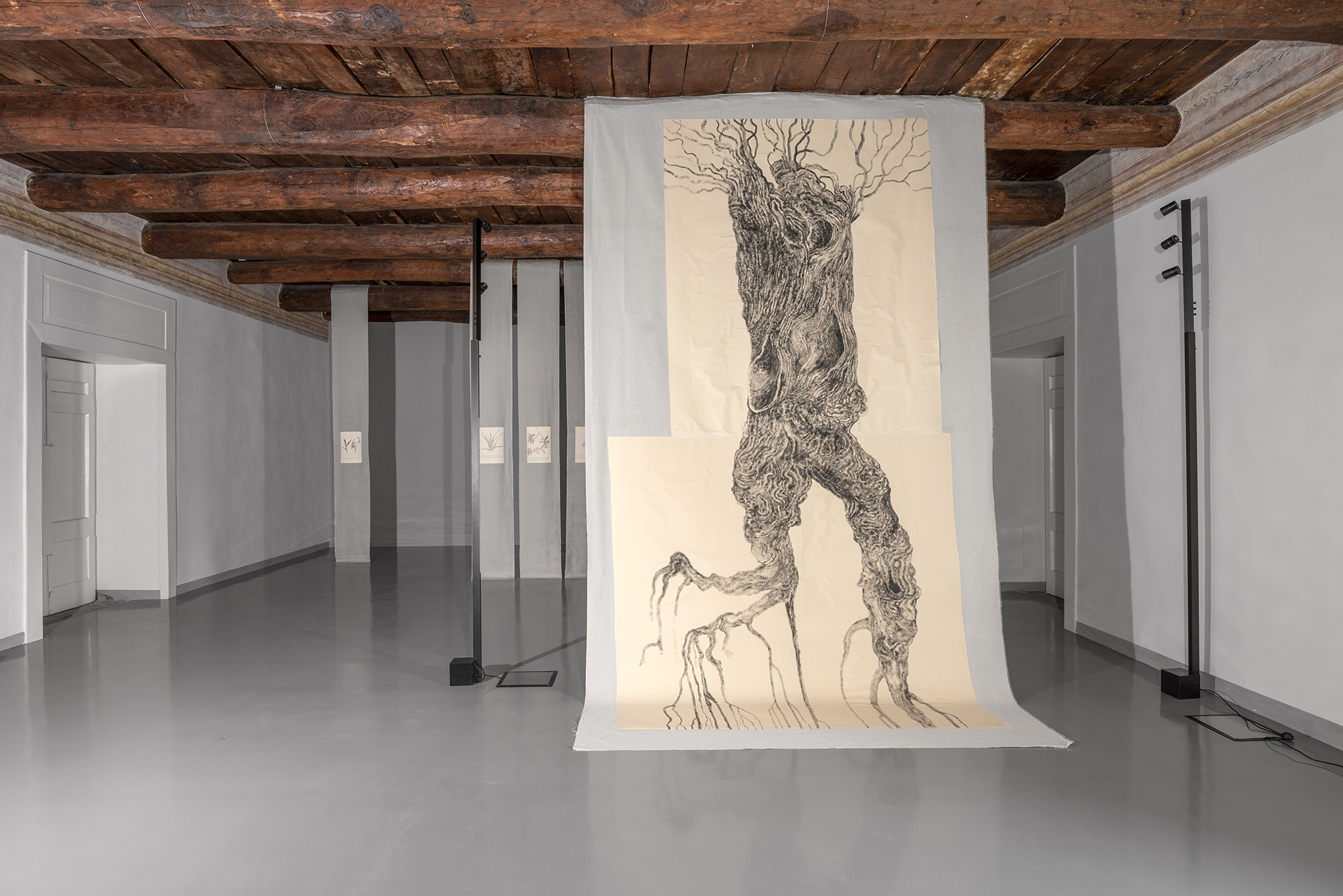 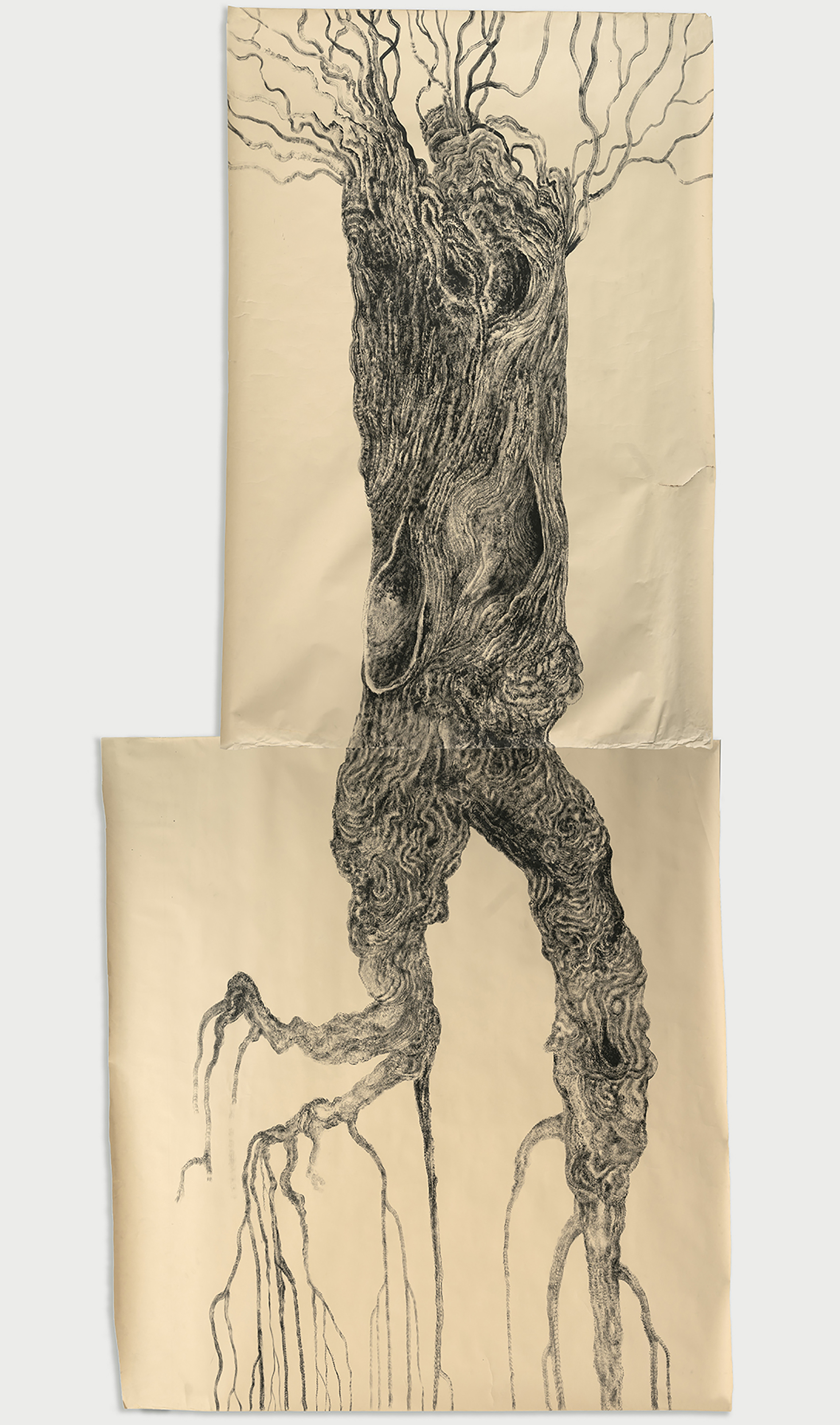 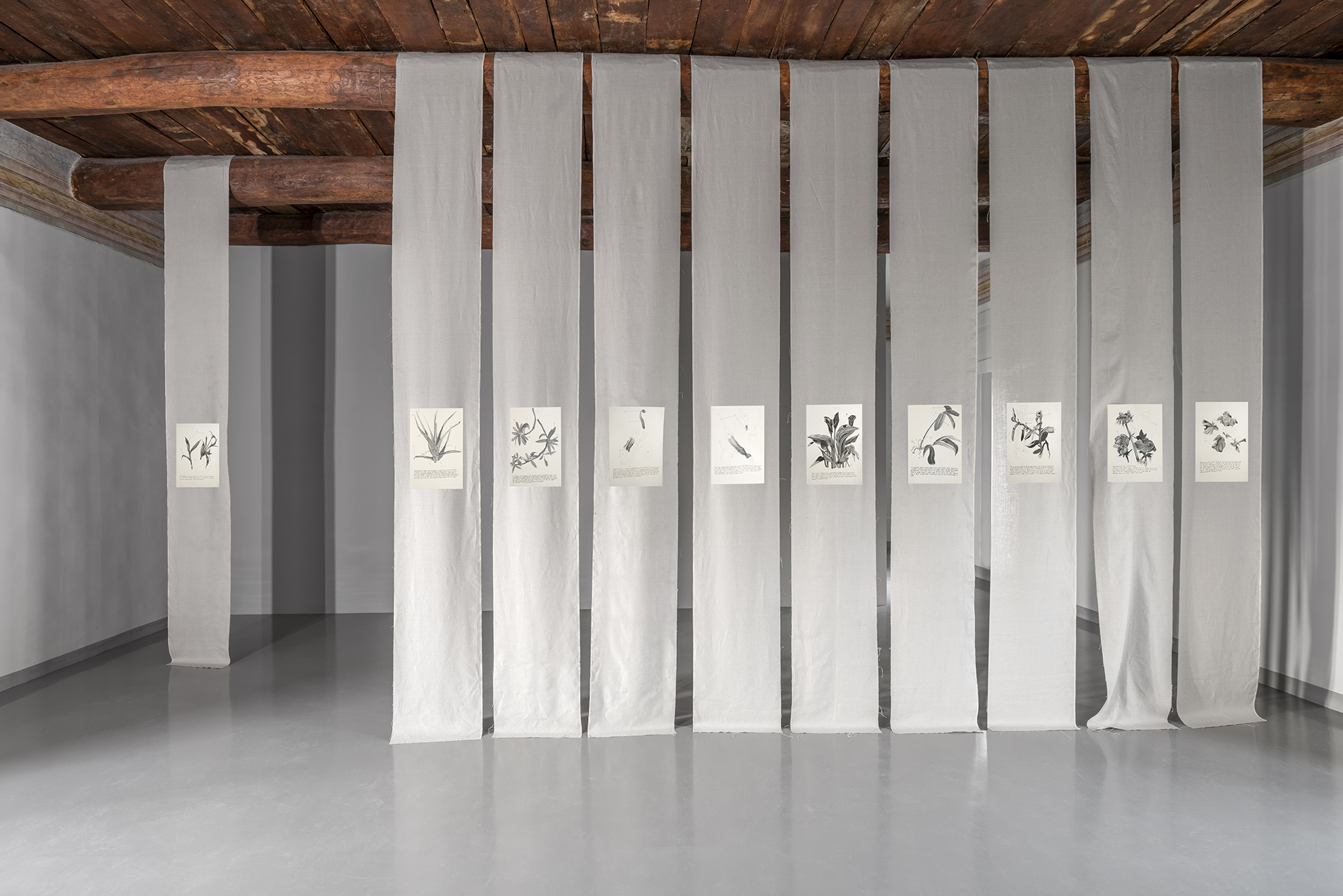 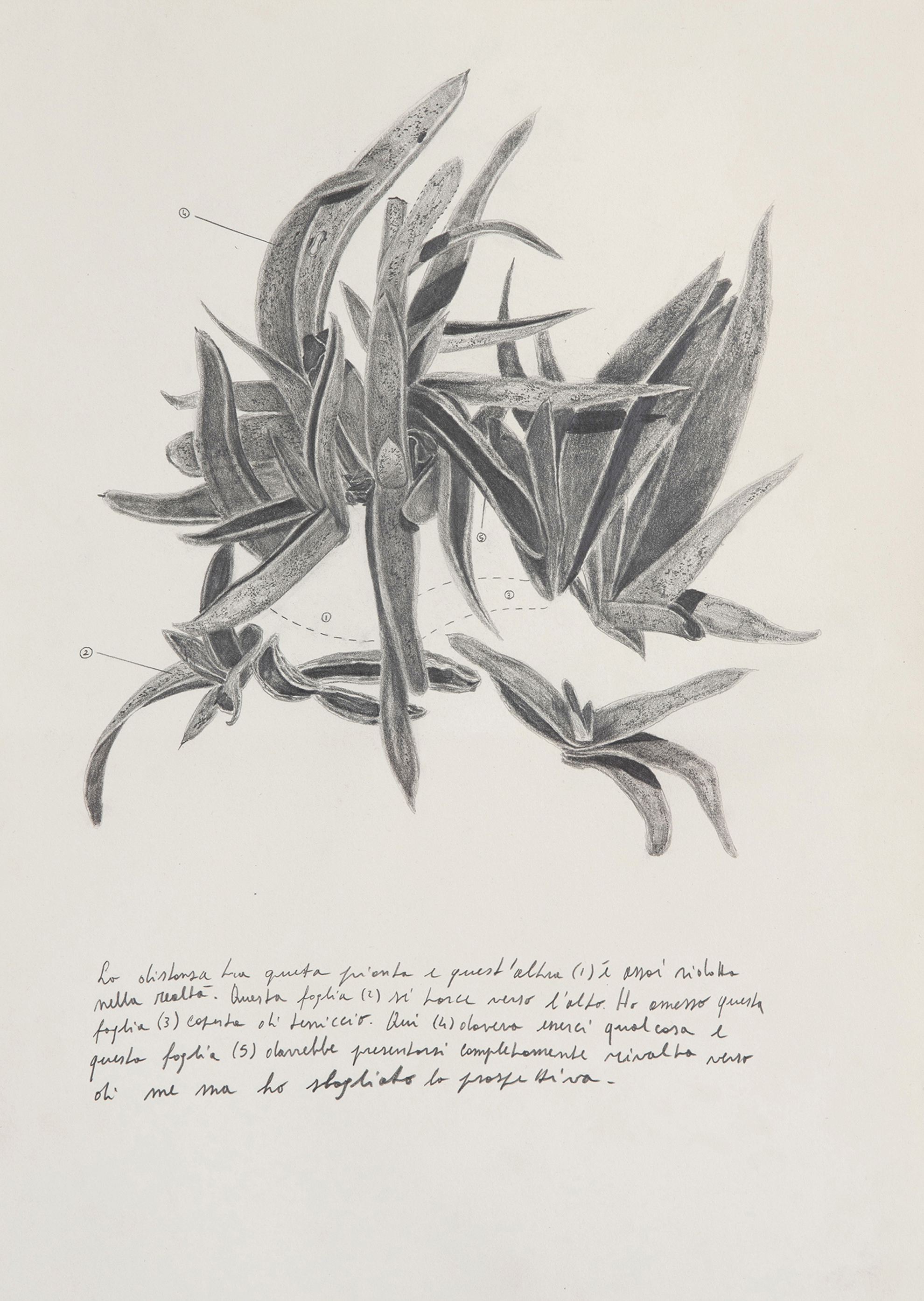 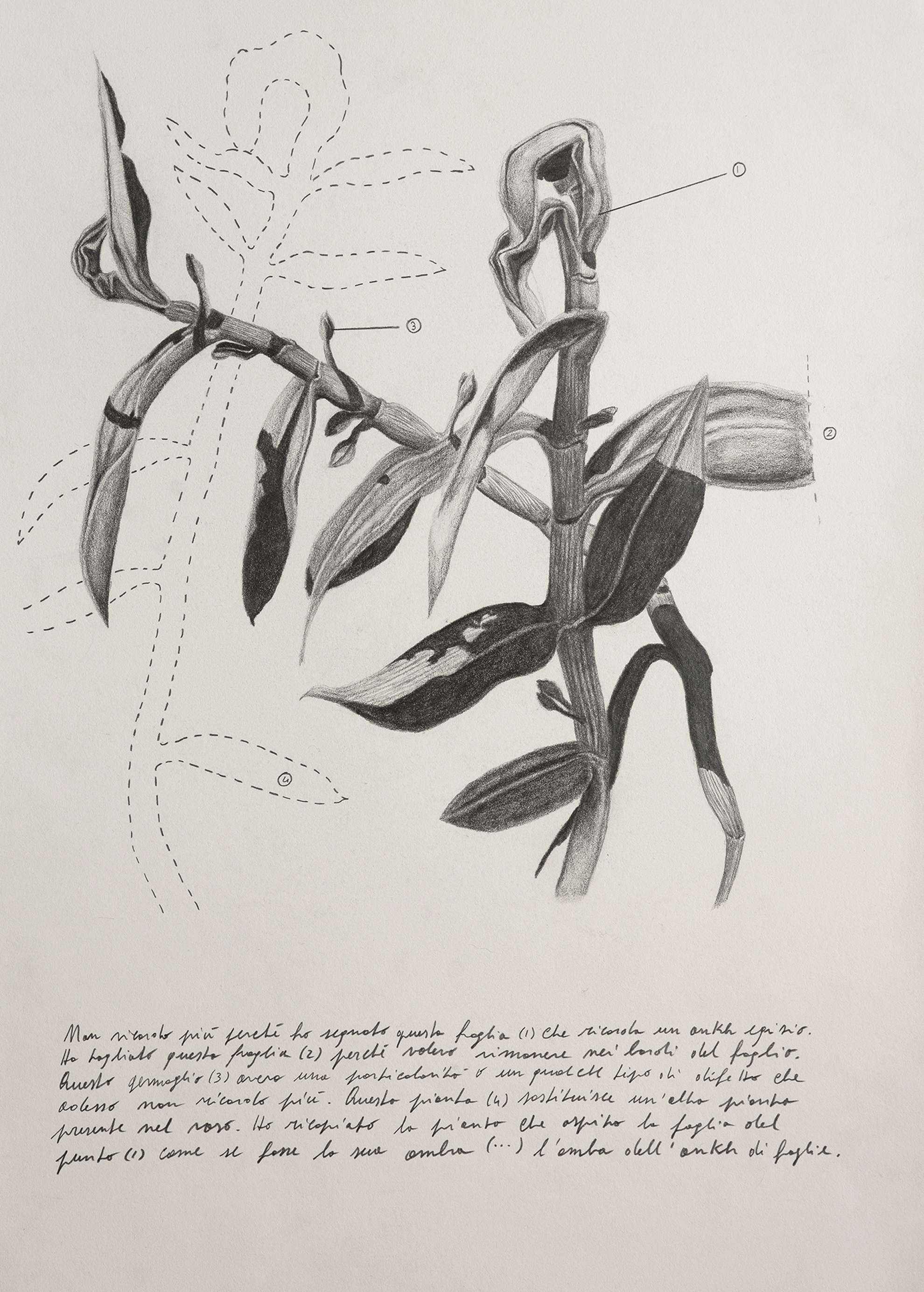 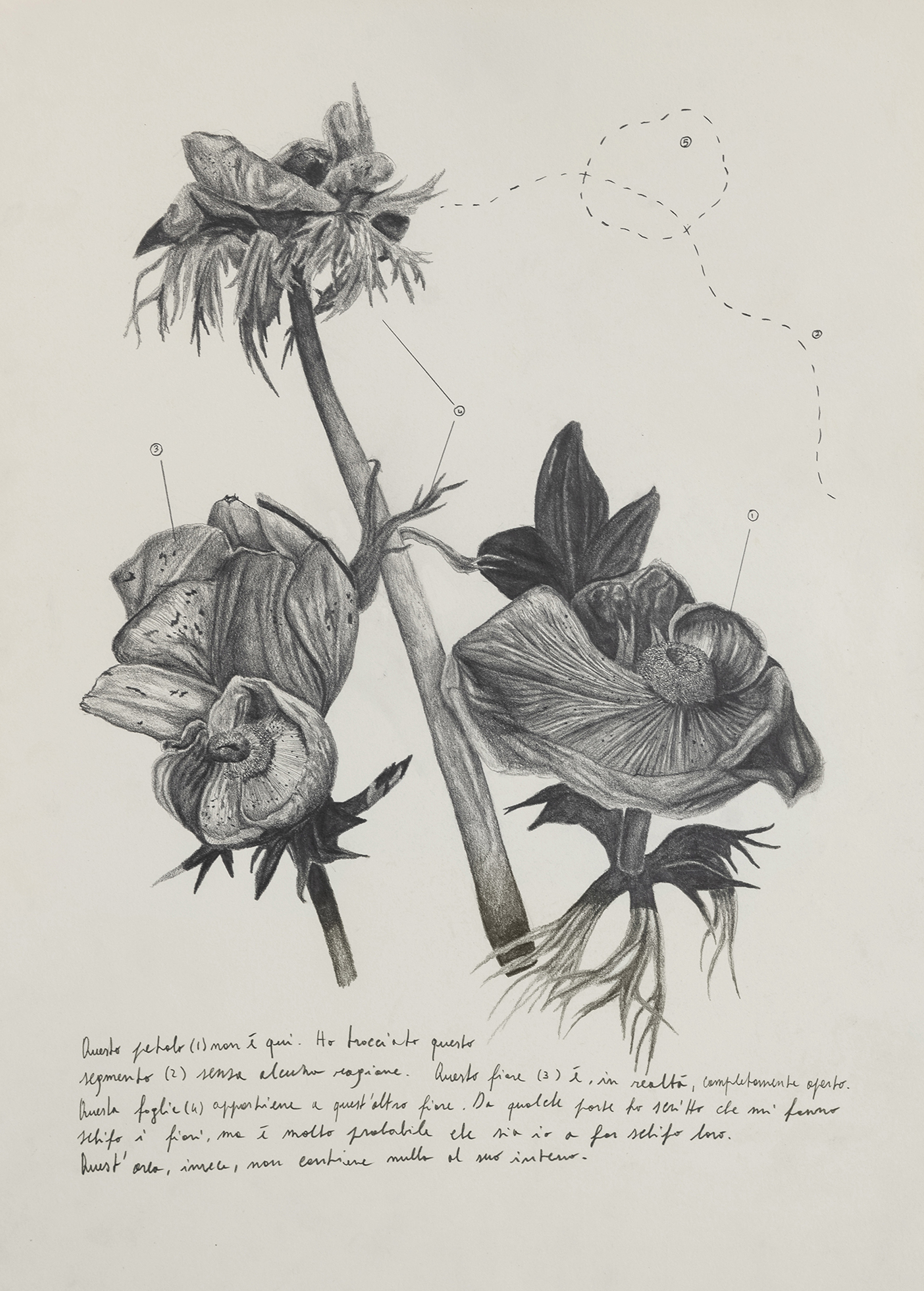 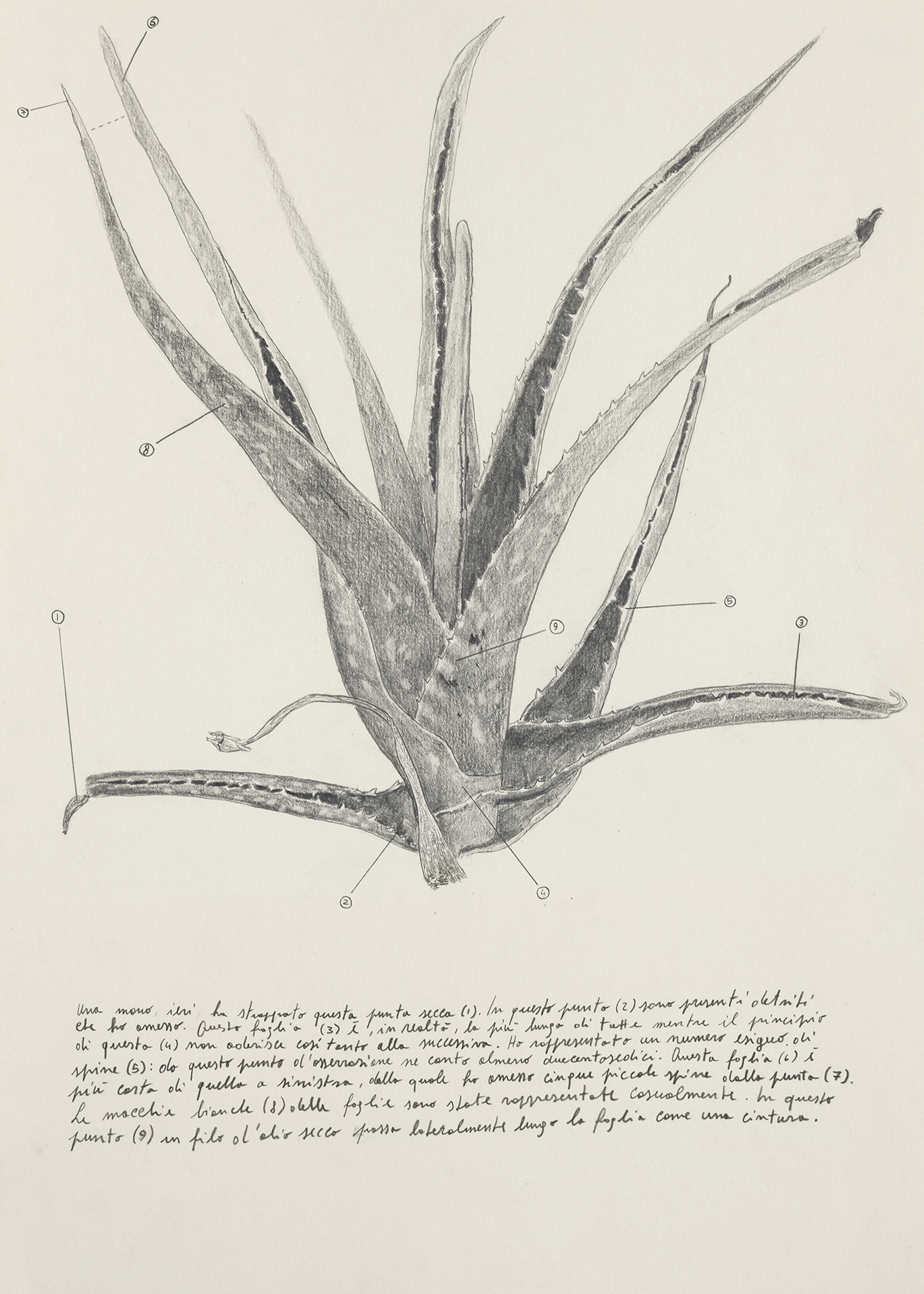 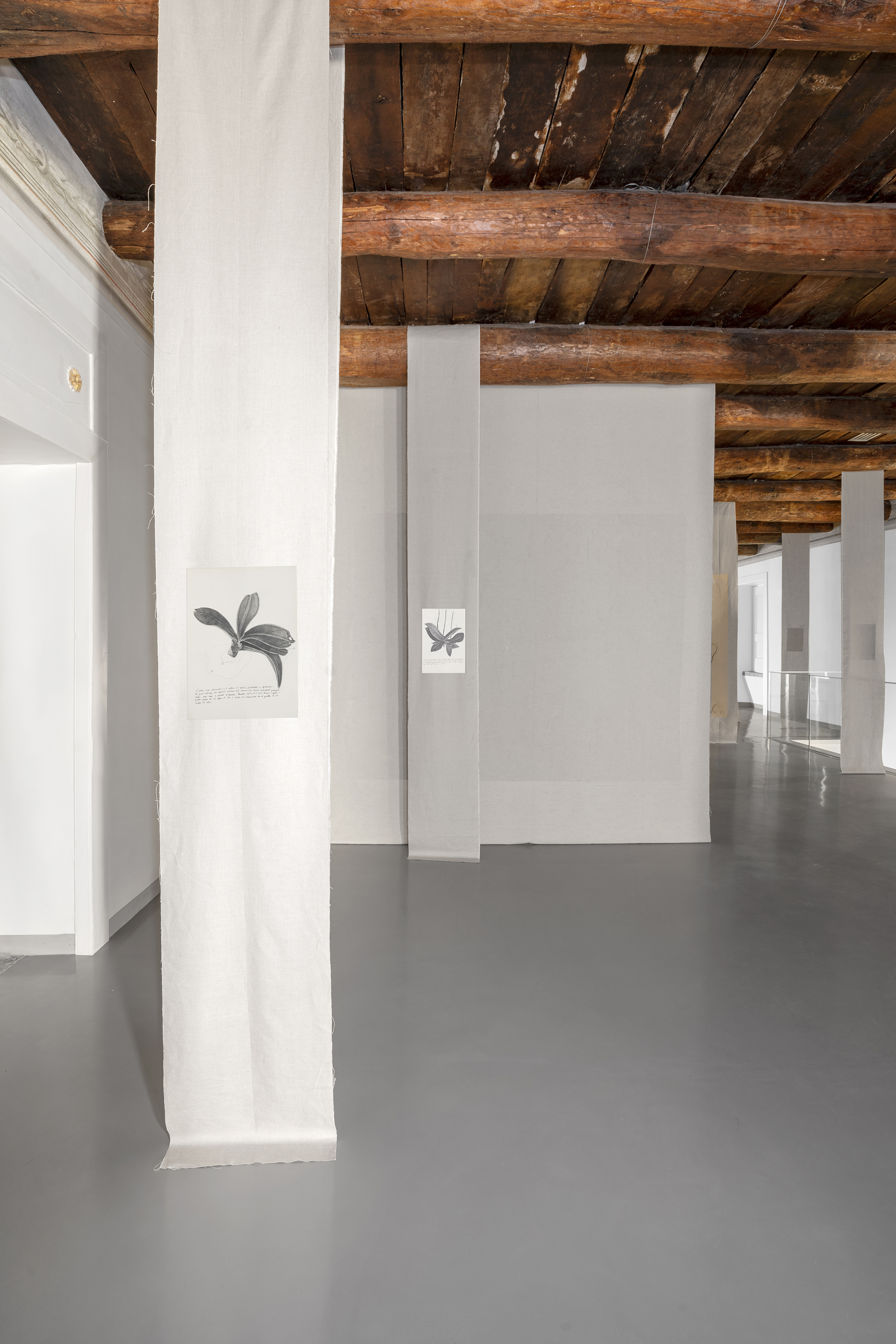 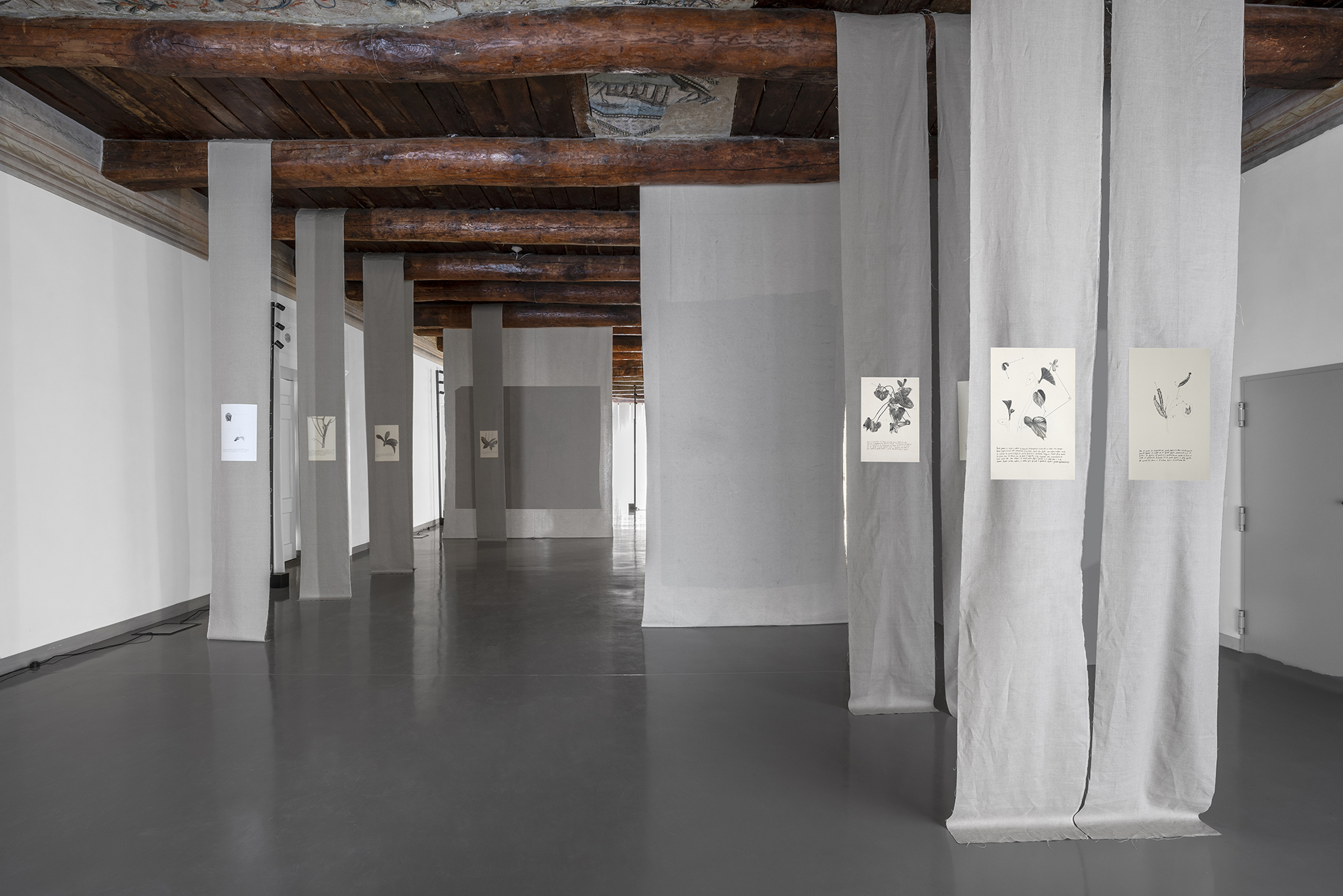 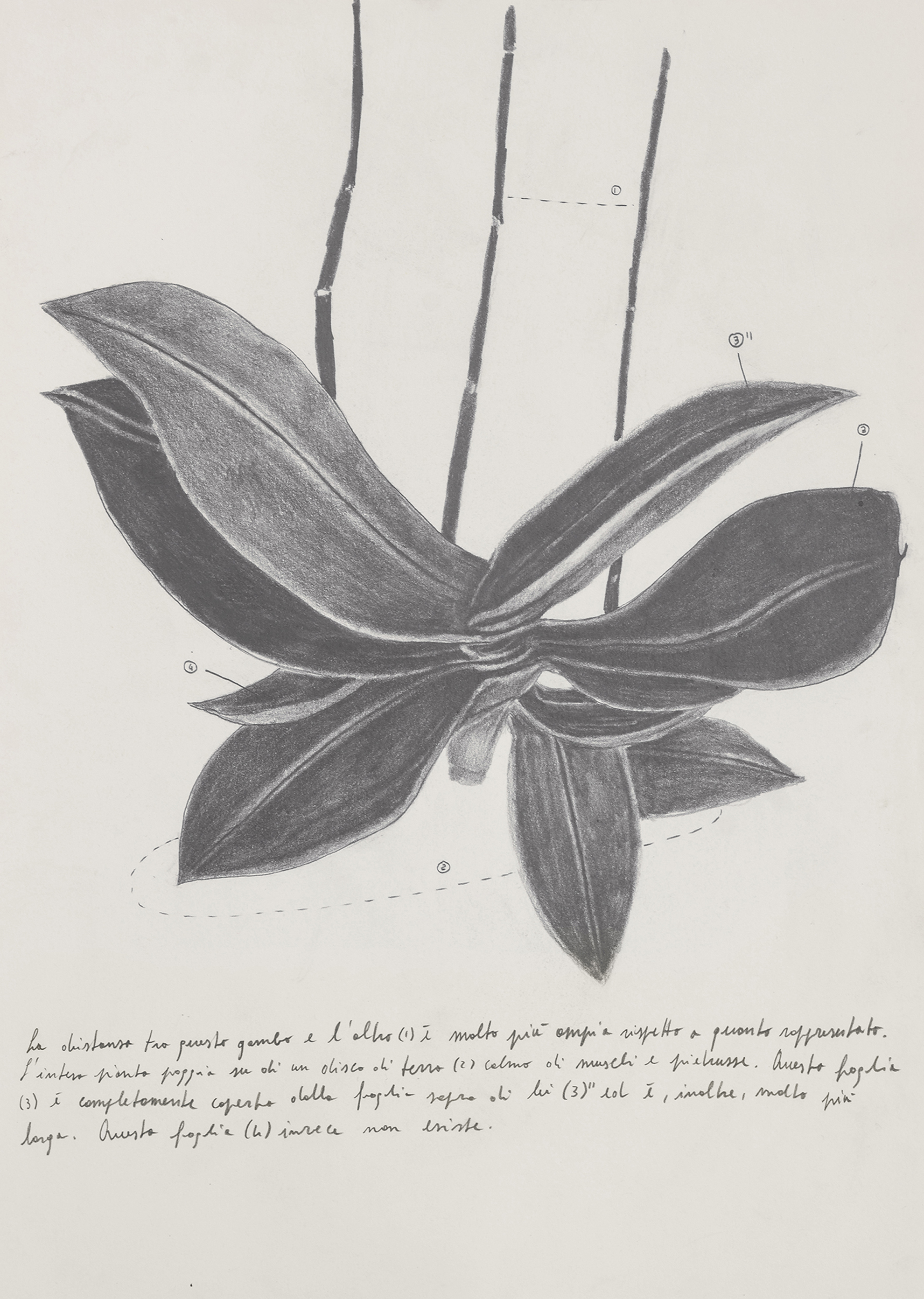 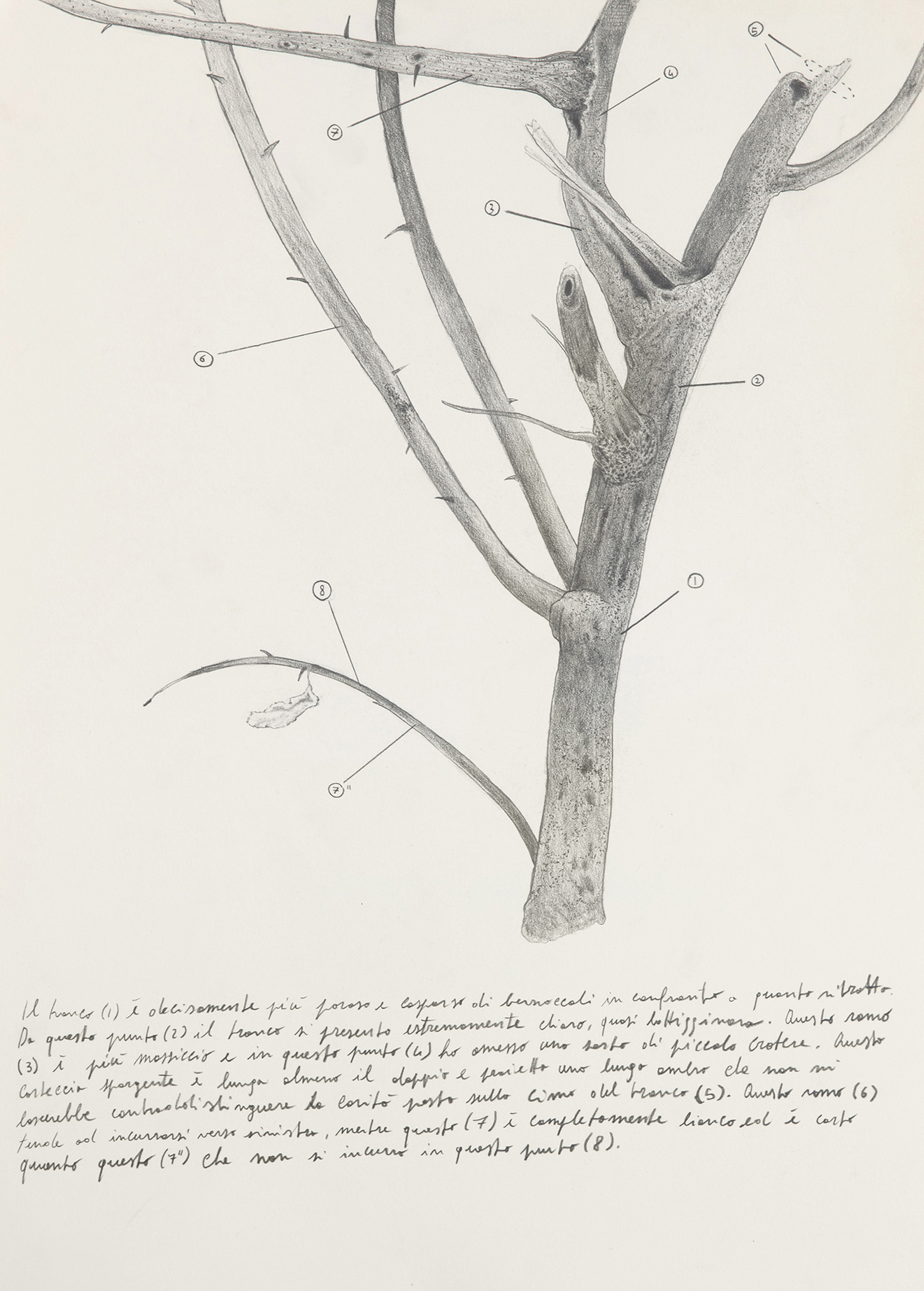 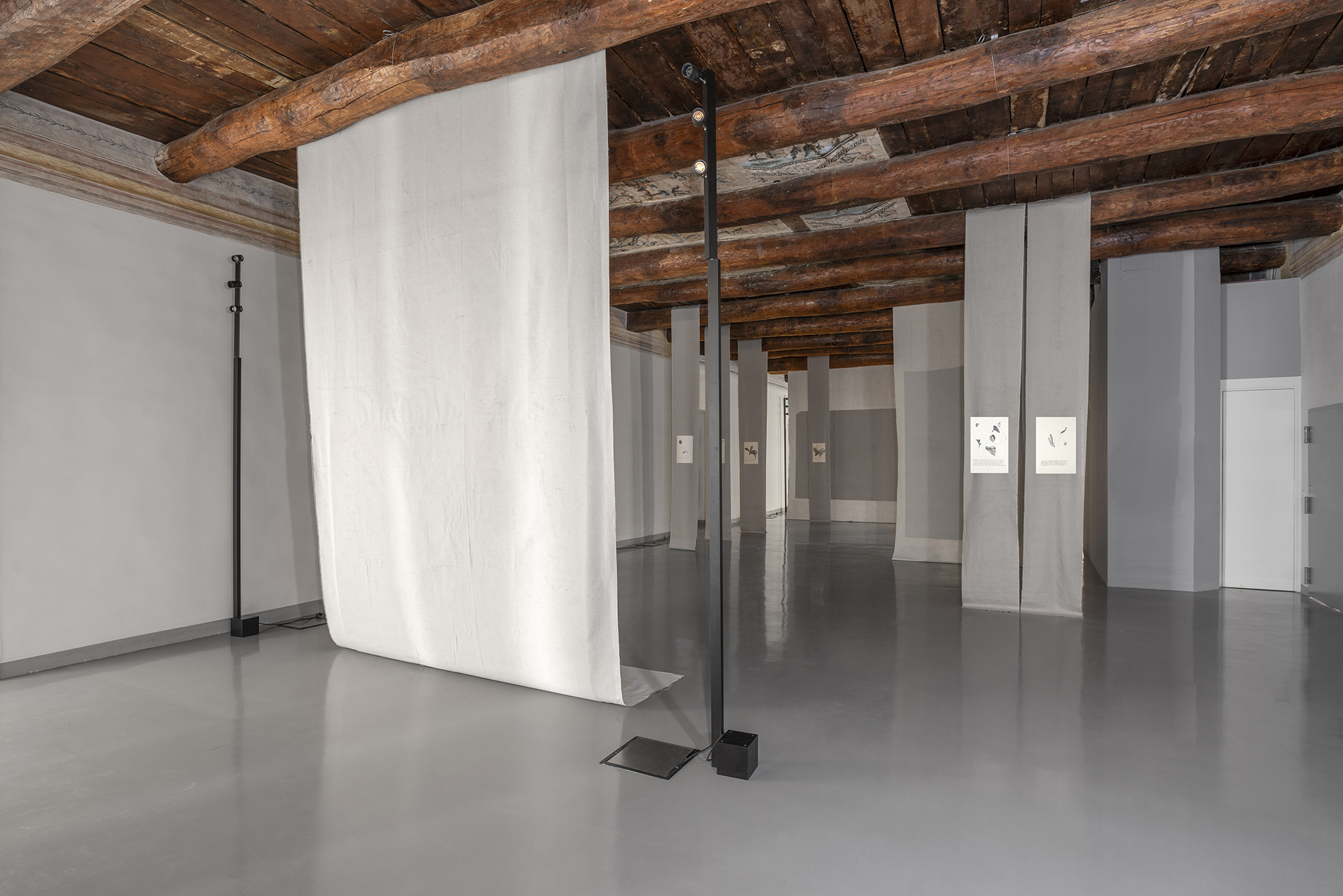 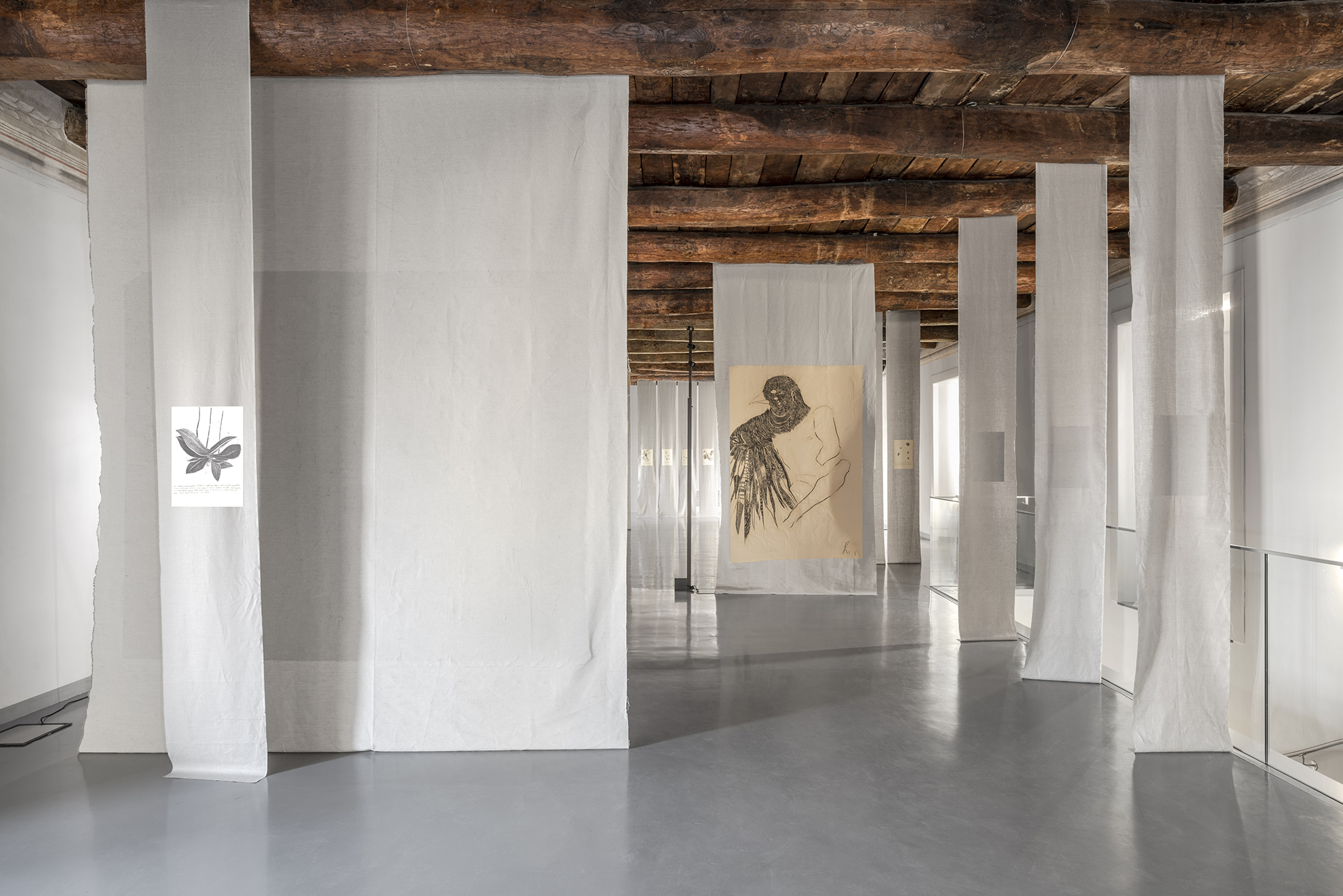 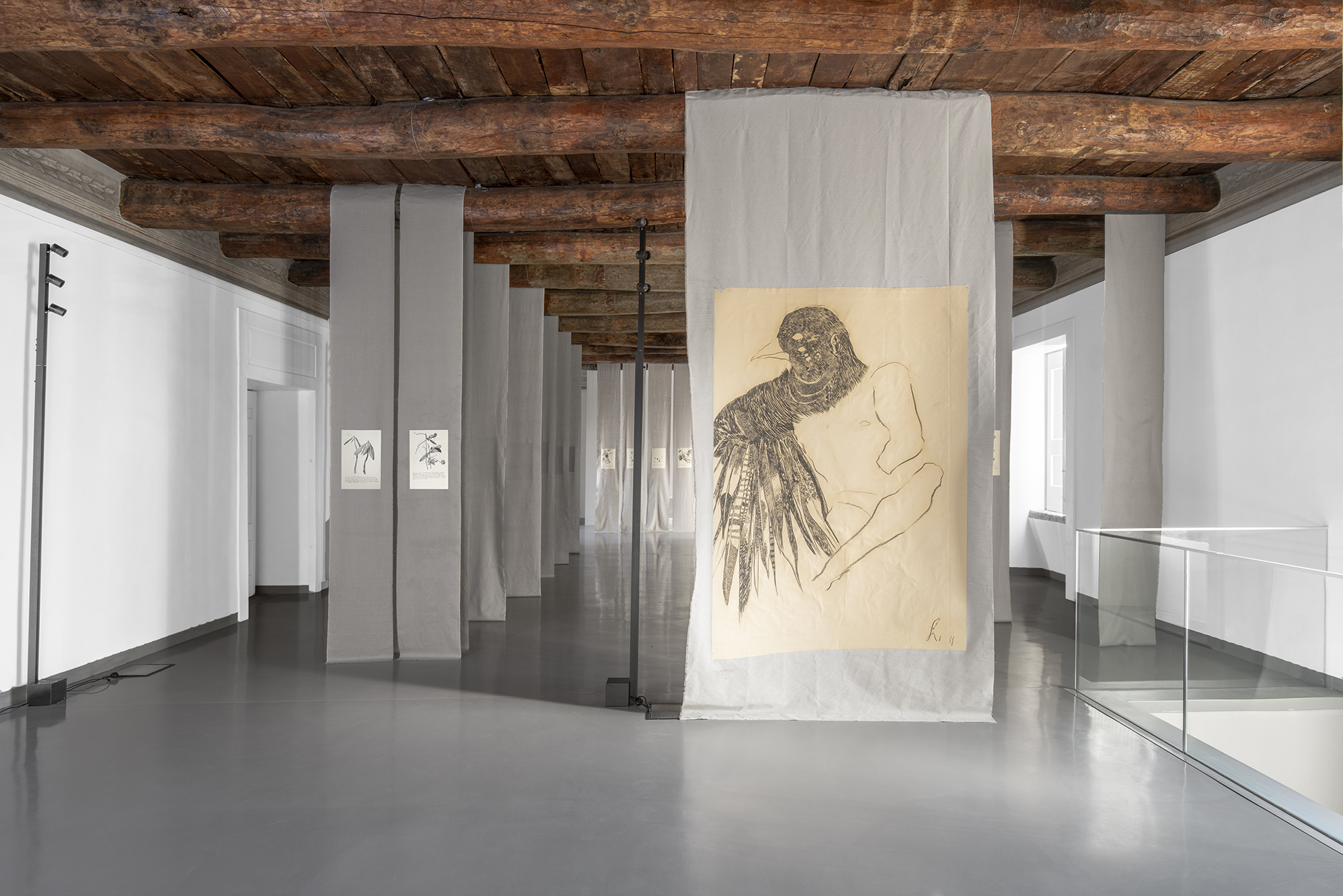 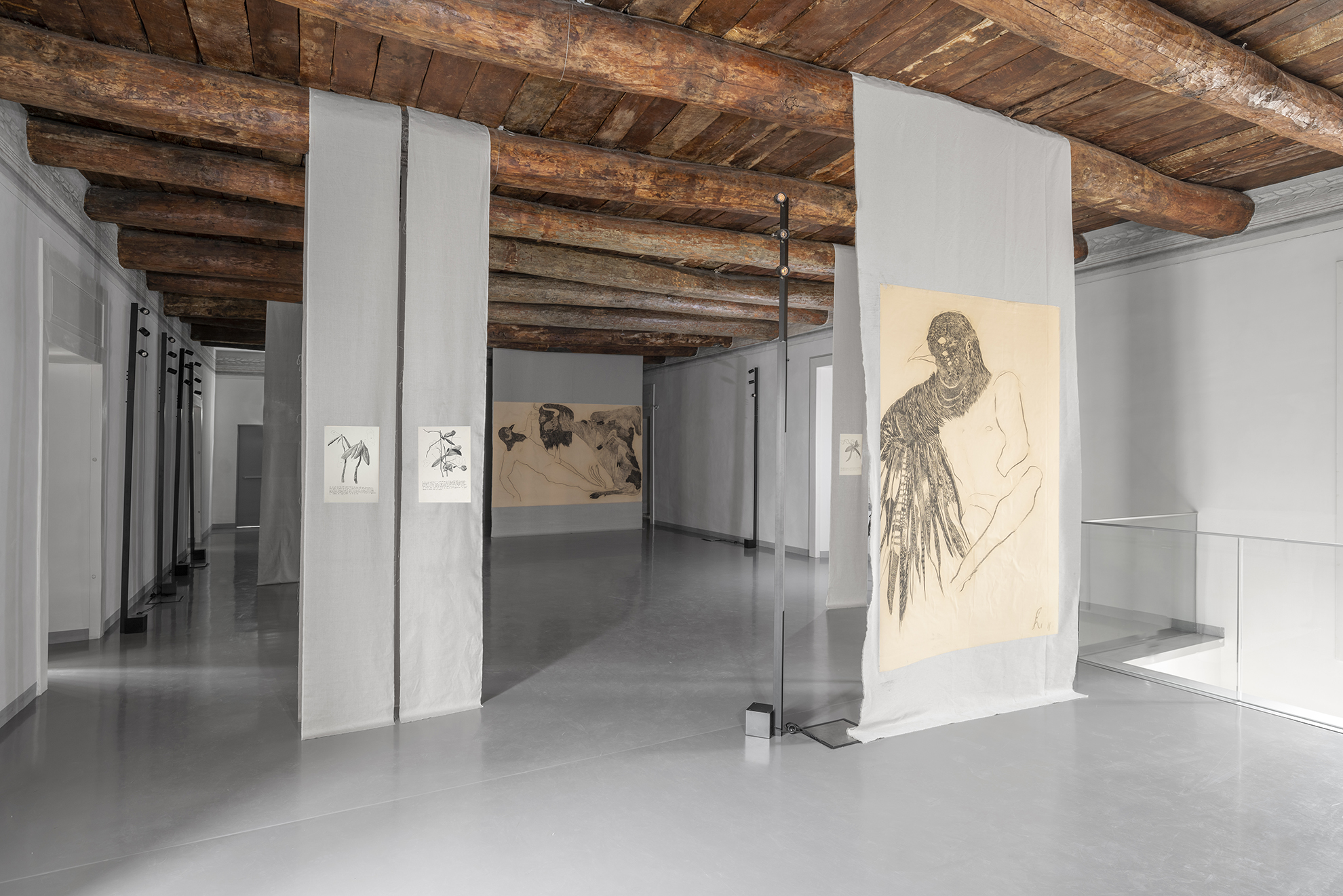 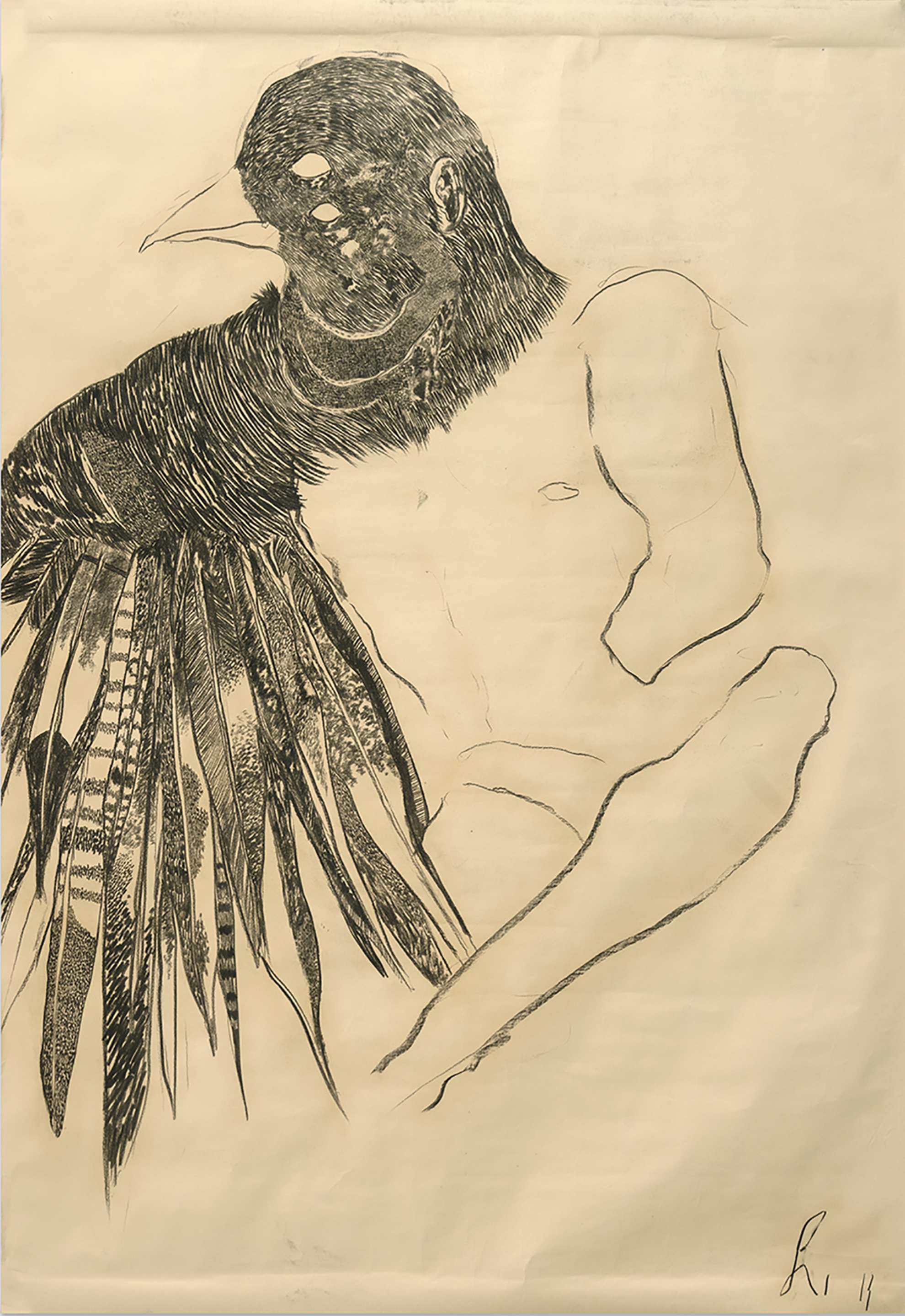 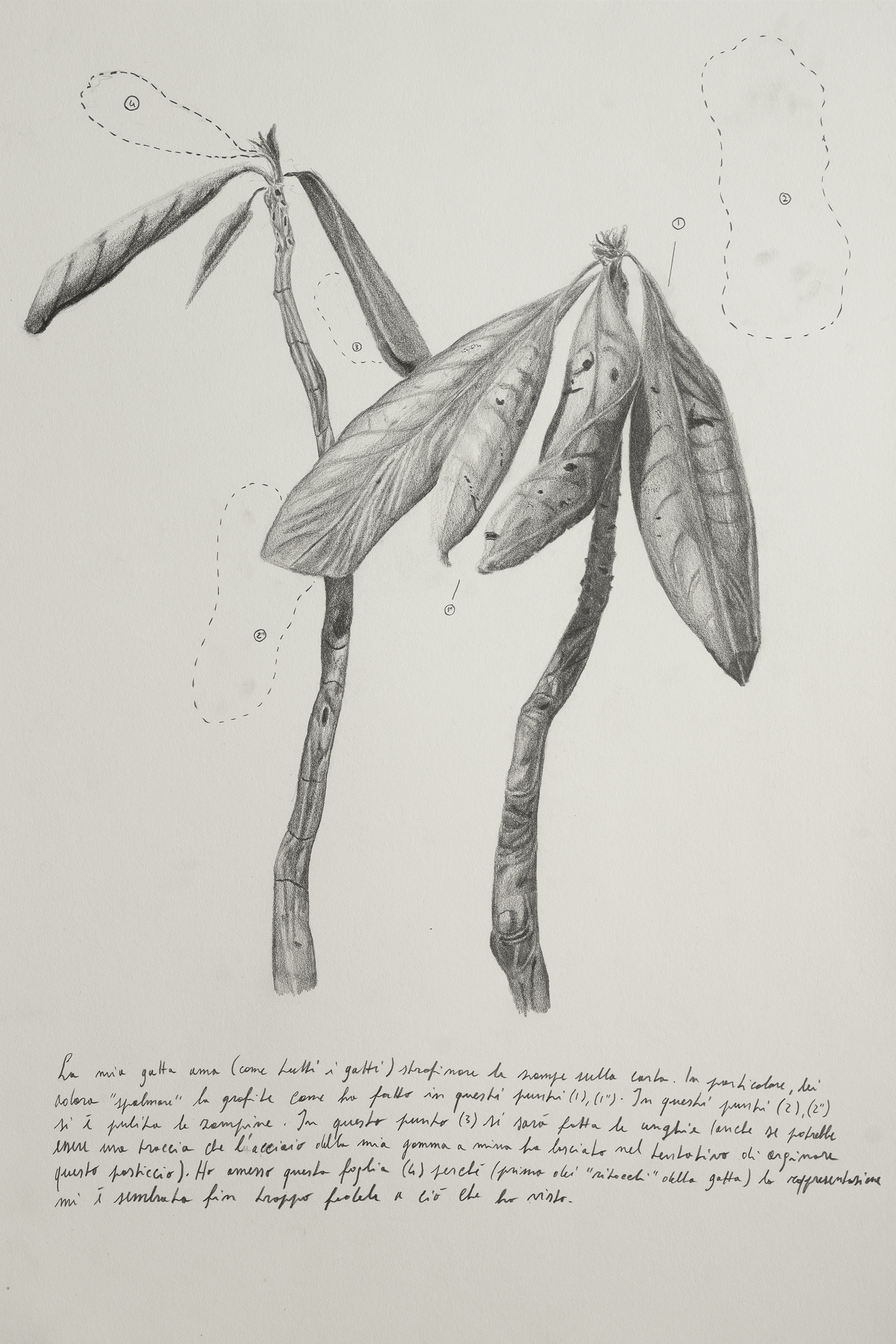 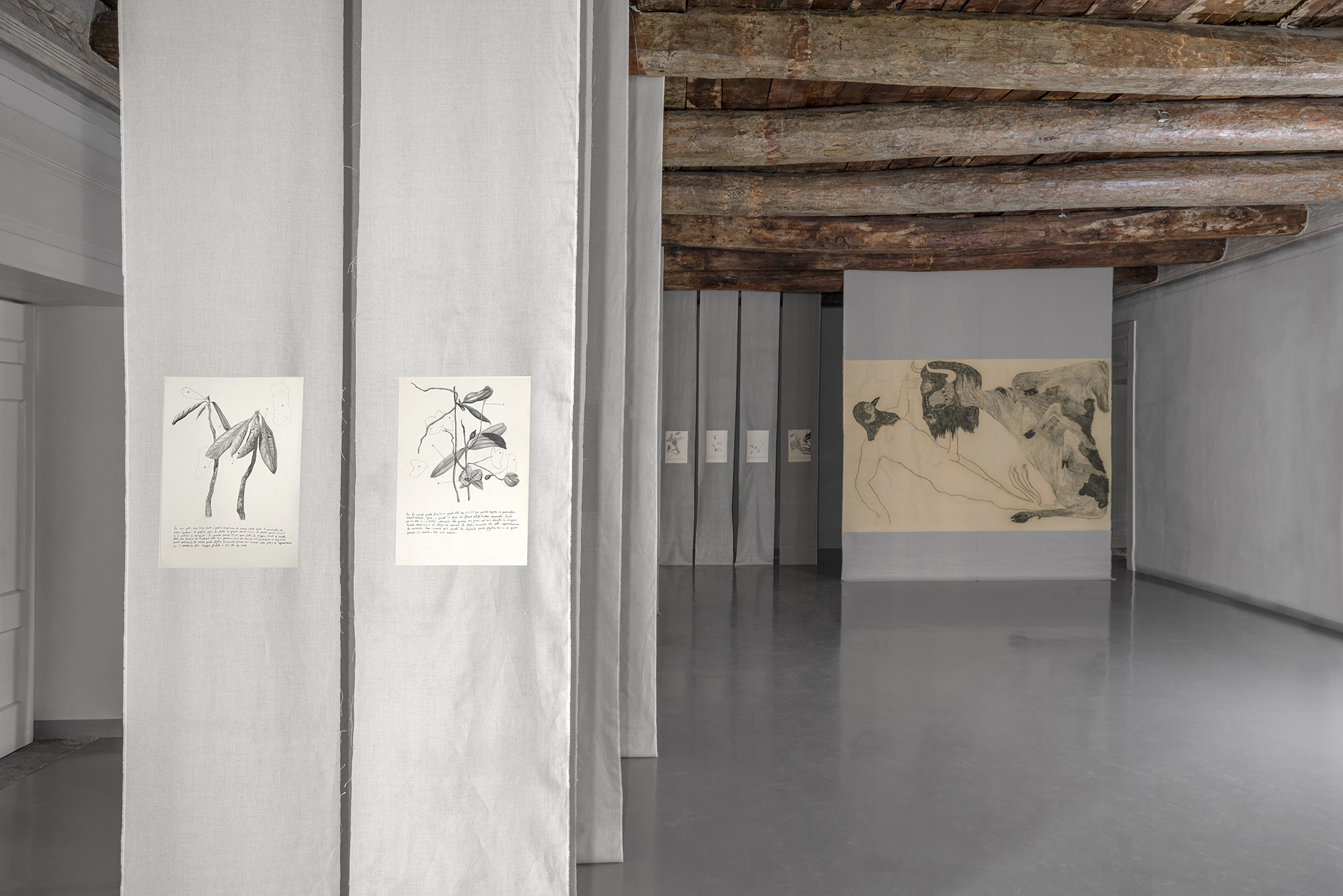 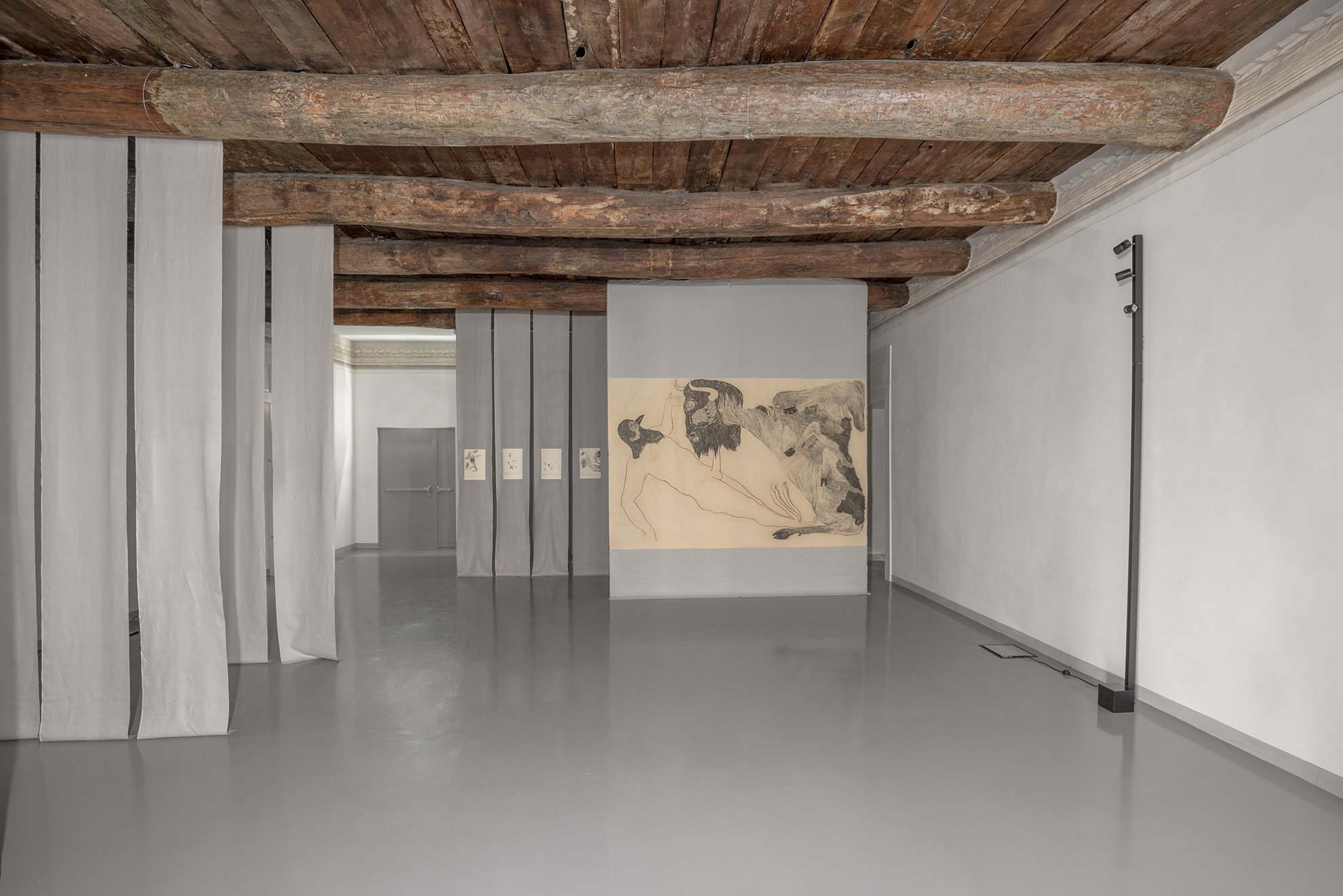 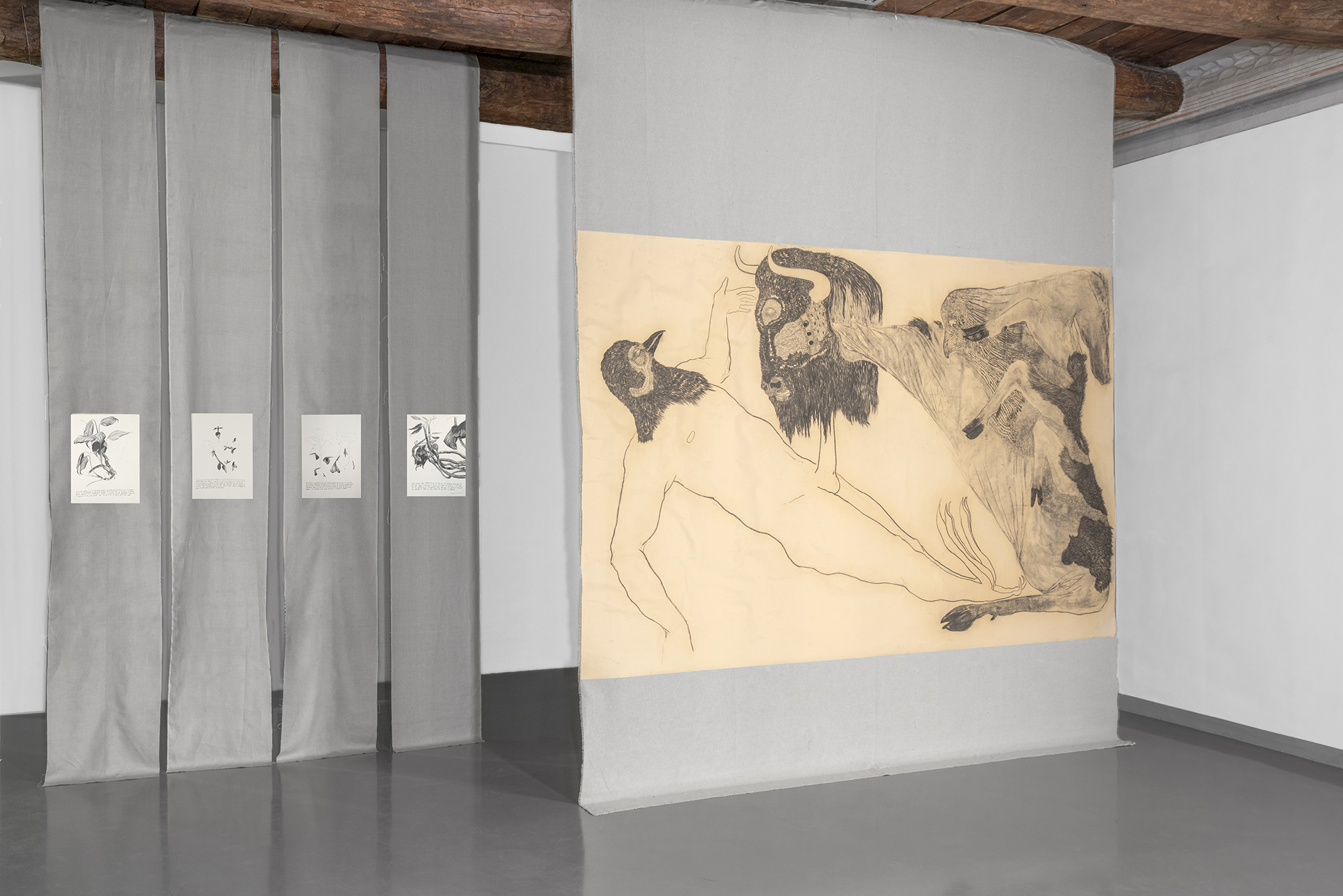 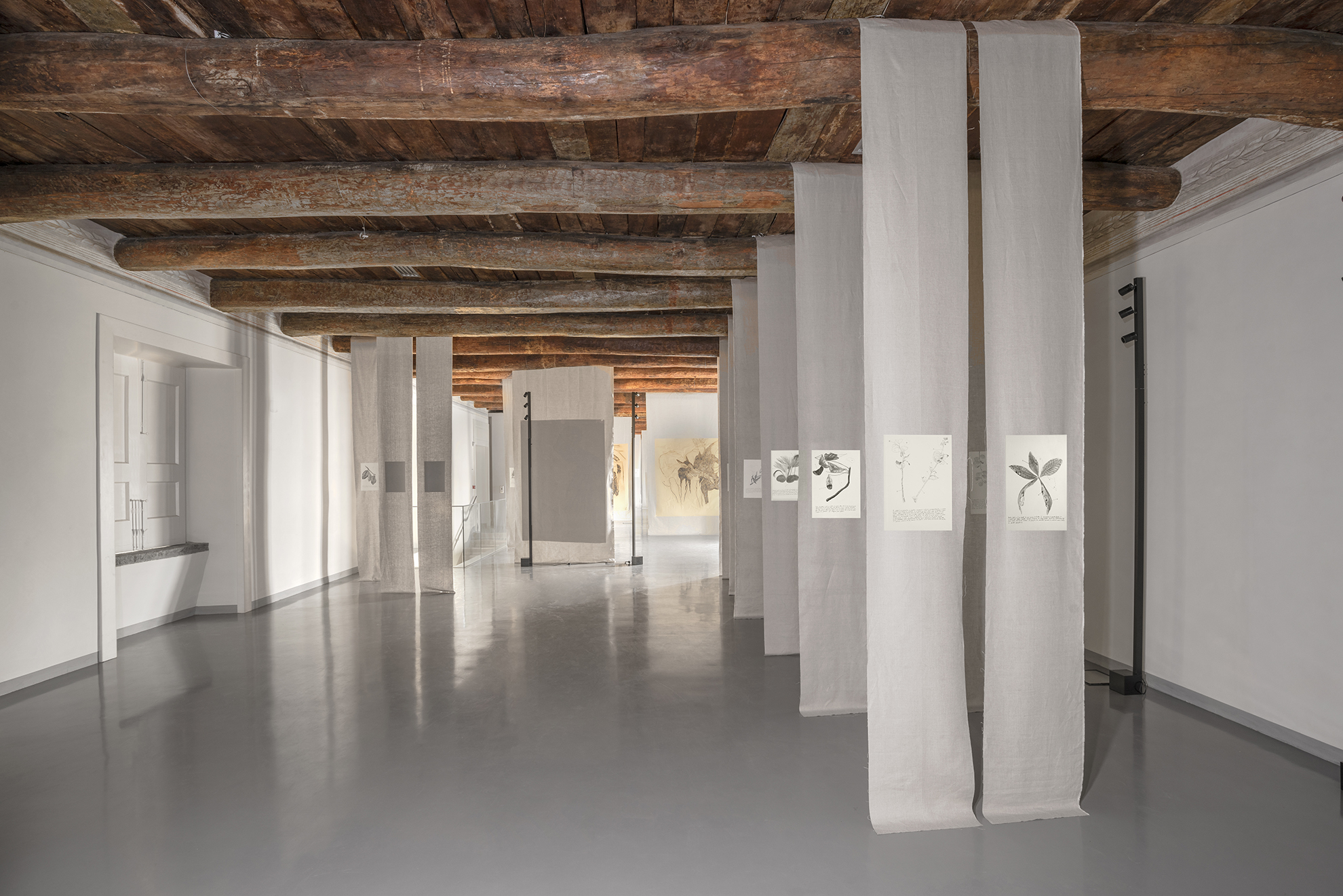 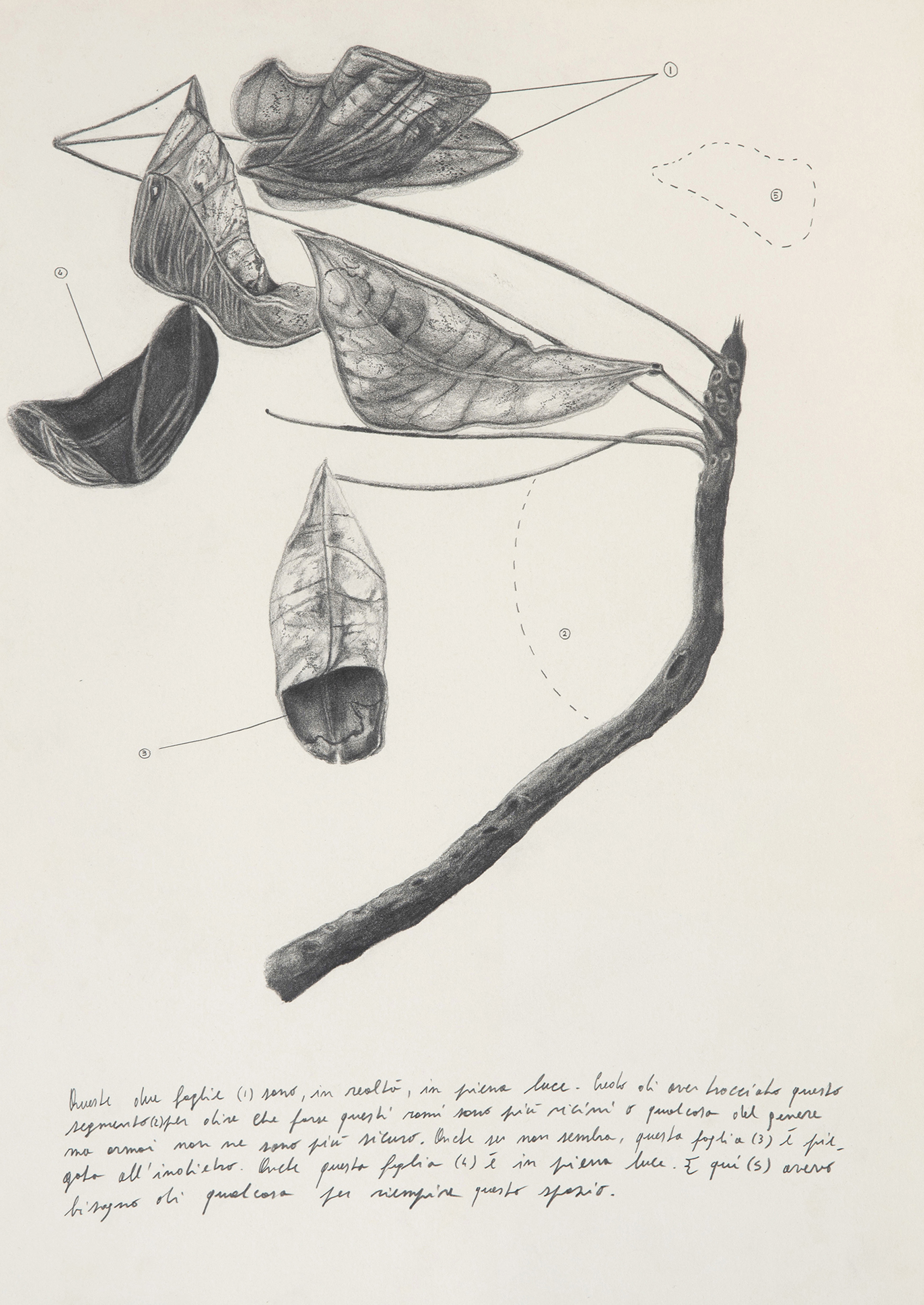 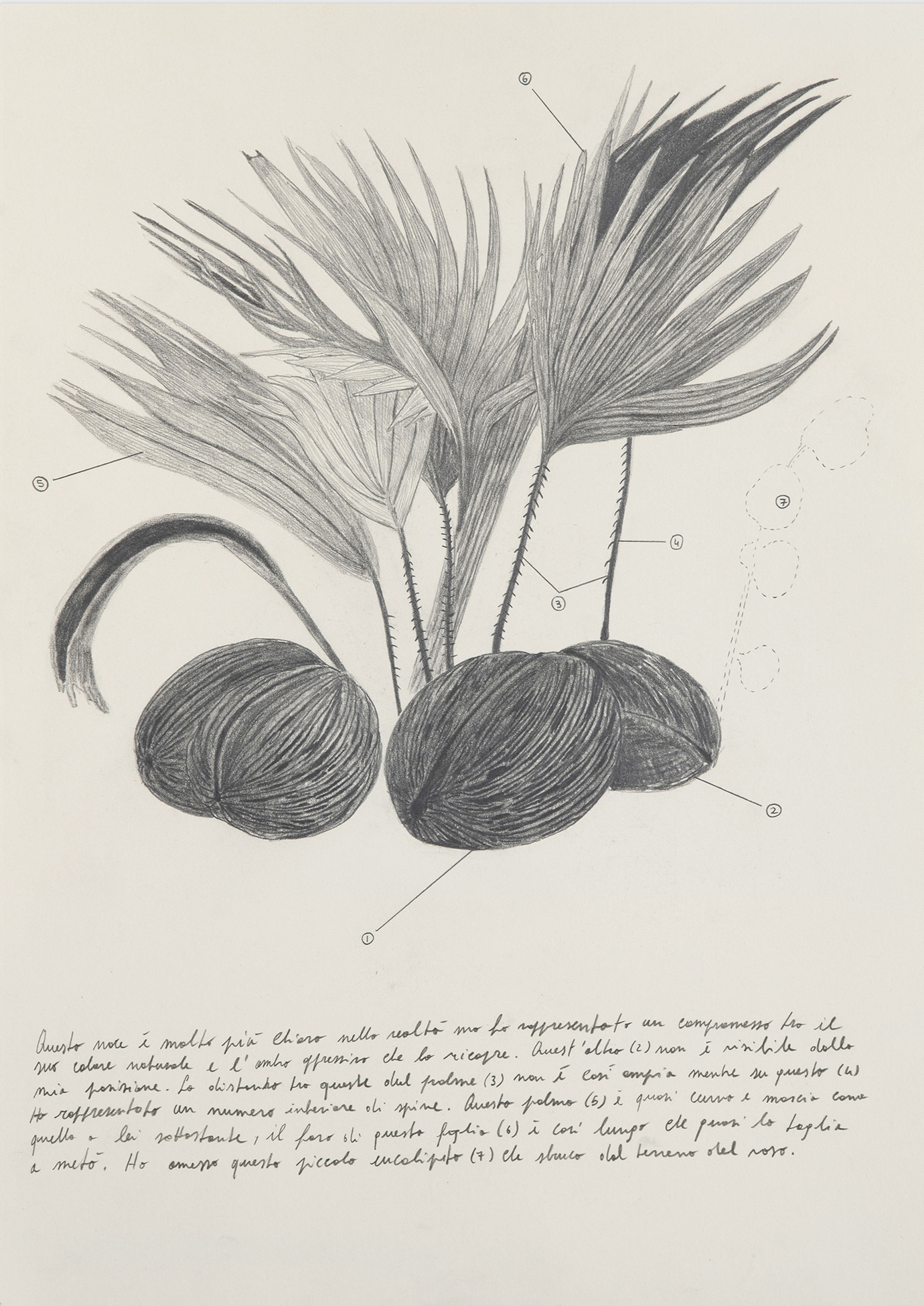 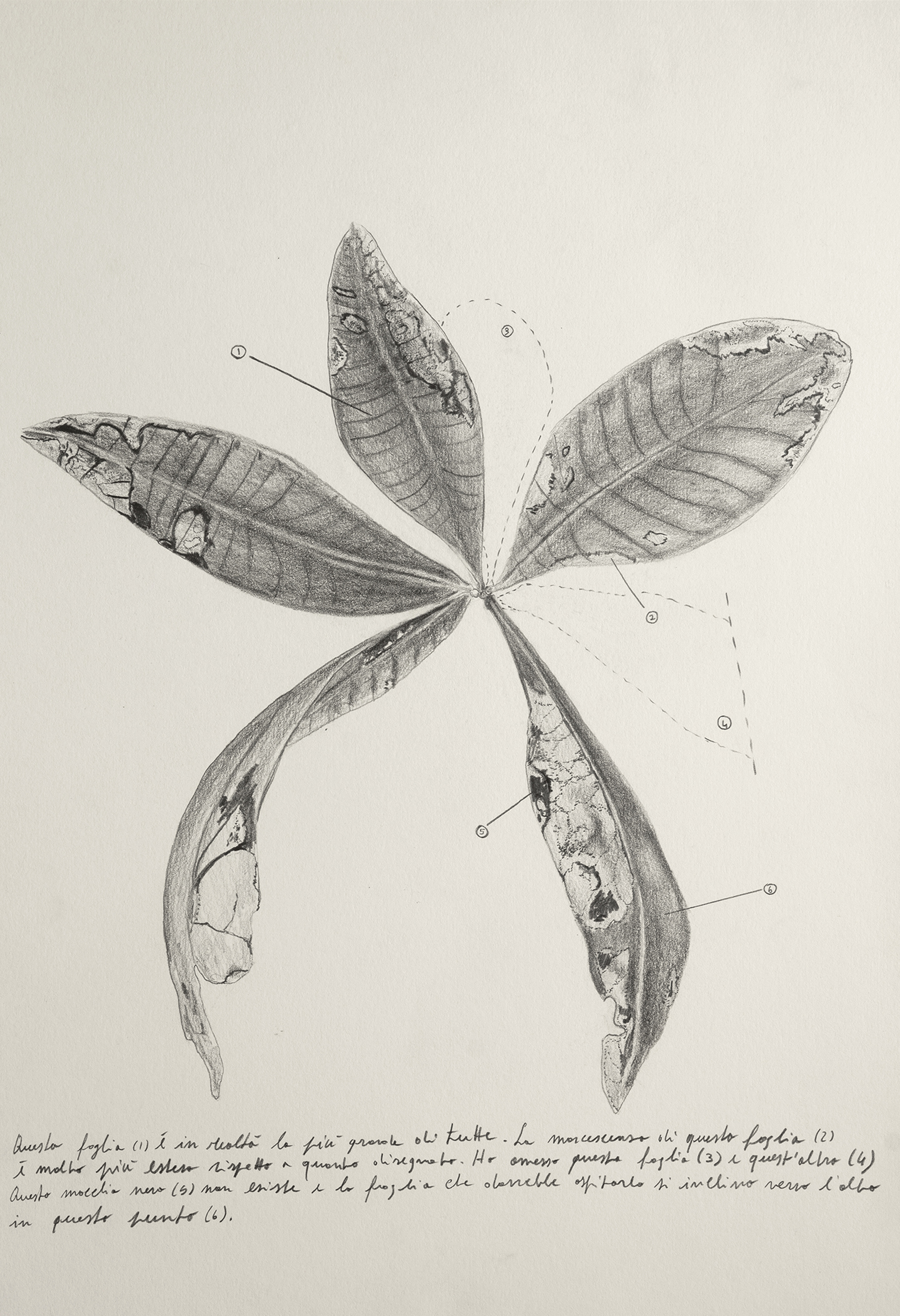 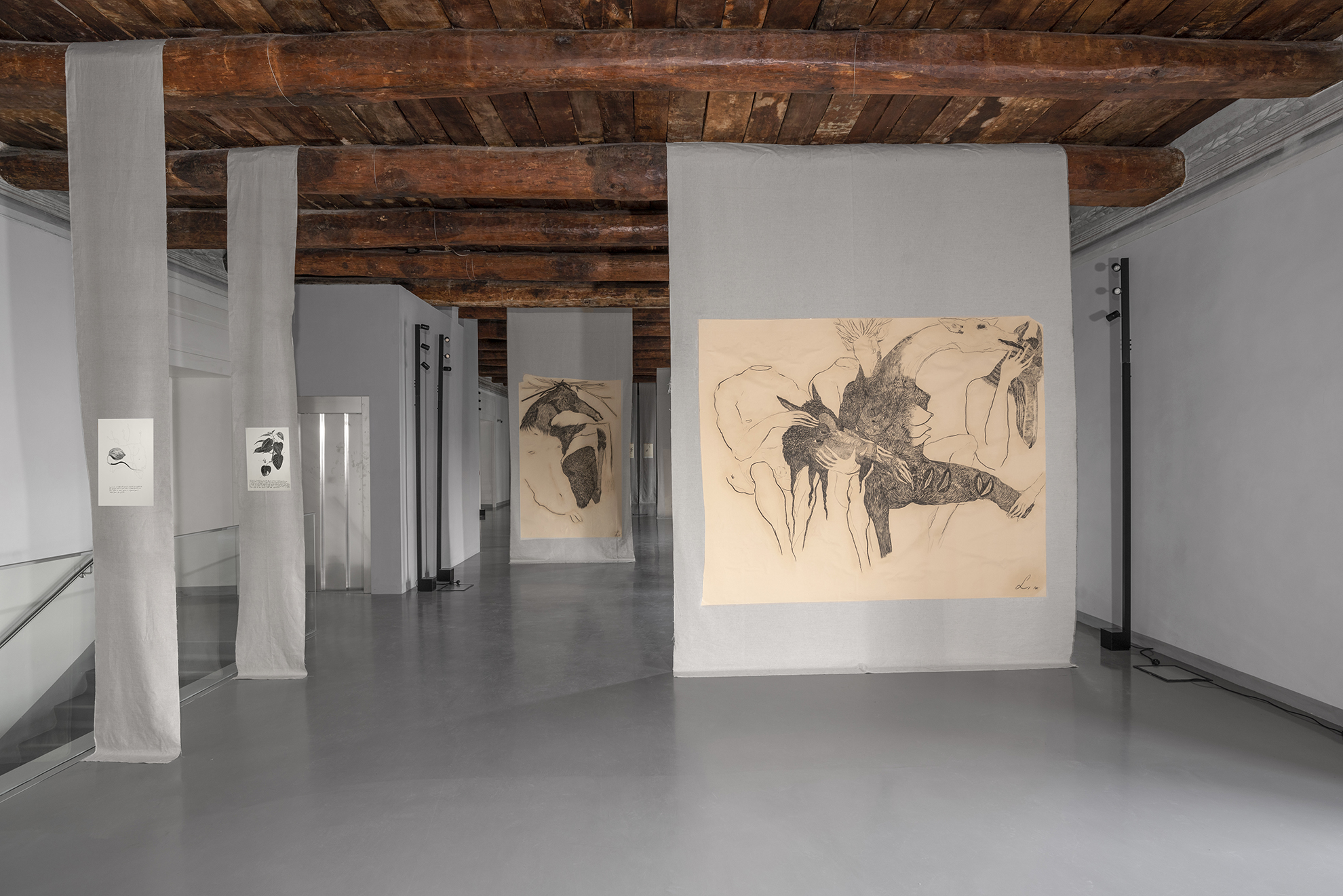 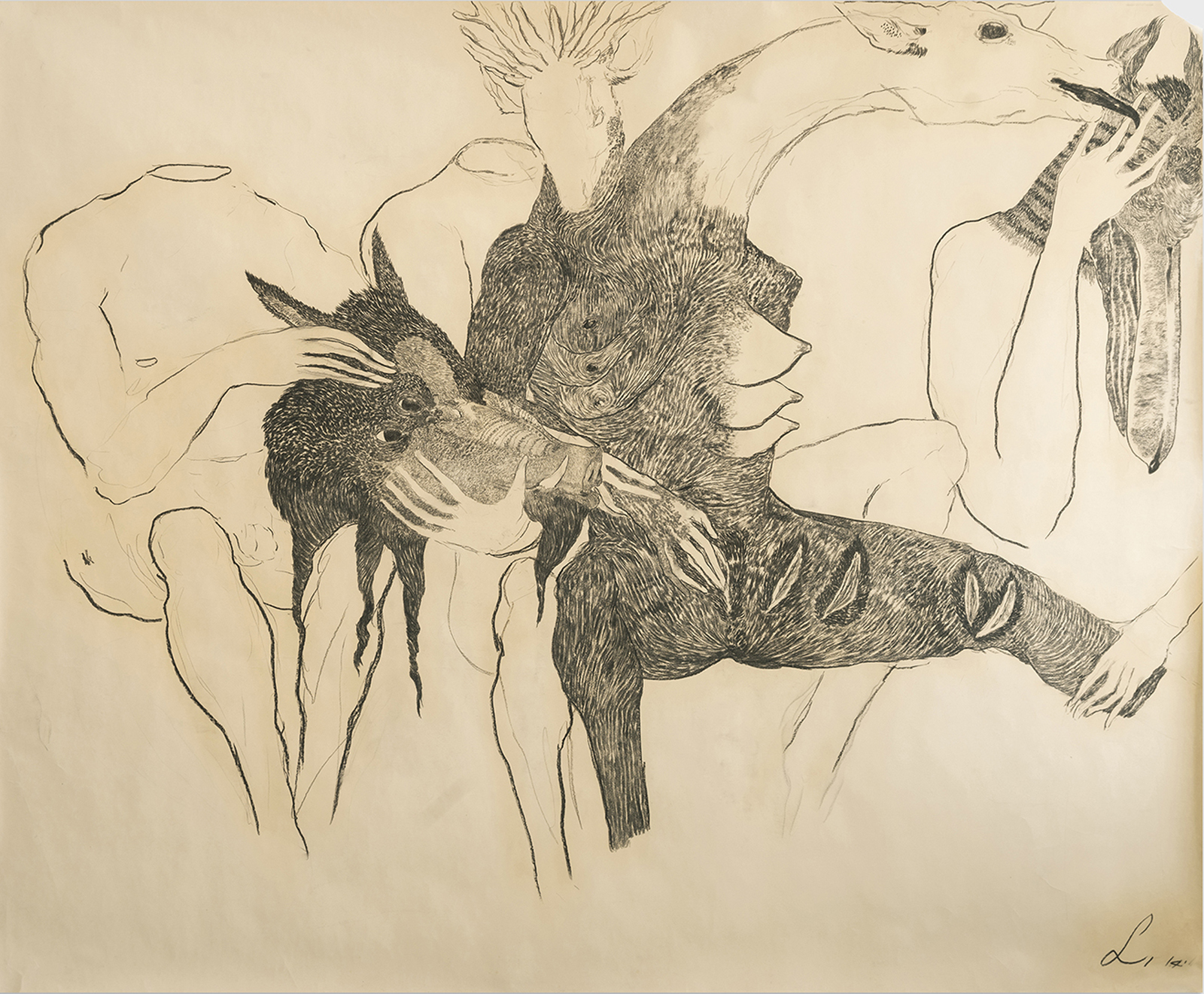 «This leaf (1) is well opened and unfolded, as opposed to how it was represented. I have portrayed only four aerial roots (2) out of seven. These two roots (3) intersects, but not in this way. In this area (4) a substantial tangle of roots was omitted; this root, instead, is not visible from my position (5).»

There is a portion of wrapped and decorated plank on the third floor of Palazzo Caracciolo di Avellino. Only this trace was found during the renovation and restoration works that interrupted the activity of Fondazione Morra Greco throughout June 2019, however it seems plausible that they had once covered the entire length of the beam ceiling. These decorations reproduce the same subjects in sequence – birds, floral elements, idyllic landscapes, archaeologies, geometries –, although, observing carefully, some differences are noticeable, some mistakes, declaring the presence of the human hand and unveiling its imprecision. Whether it is intention, distraction, or lie, it is impossible to say.

For a few months, Luca Gioacchino Di Bernardo (Naples, 1991) lays out a large number of plants from the terrace of the house where he lives and works, he begins to portray them obsessively, thus composing a herbarium of about fifty graphite drawings on paper. As in medieval botanical studies, one illustration and one text cohabit on the same page; unlike those, however, illustration and text exist here in constant contradiction to one another. The artist describes fictional details, makes omissions, practices morbid attention to irrelevant minutiae, lies.

In these scientific compendiums of falsehood different levels of experience mingle – the seen, the imagined, the eluded – and the only infallibility resides within the uncertainty of representation, that becomes a pretext, a survival mode, the insane quest for a non-existent order. The plants, here paradigm of all that exists for knowledge, and therefore of the whole world, are the object in relation to its subject as intended by Schopenhauer, perception of the perceiver, representation. The drawer is the observer, the cognitive subject who has roots in the world and is found in it as a person (Arthur Schopenhauer, The World as Will and Representation, 1819).

In the unveiling of the fallacy of a universally objective representation of truth lies the misfortune of such subject. From his impotence towards the impossibility of a real narration and the urgency of a subjective story-re-telling, comes a series of charcoal drawings on paper, in which the drawer-subject depicts himself as a being in an interrupted becoming, uncompleted and disfigured by paranoia and archetypical desires, that through the same self-representation he attempts to exorcise.

Di Bernardo thus triggers a research that is from the outset fallacious, intentionally applying an empirical approach to a scientific process, deducing a series of unresolved studies and representations, that in the drawing find embodiment, yet never remedy.